Book Review of Leaves of Revolution by Breeana Puttroff 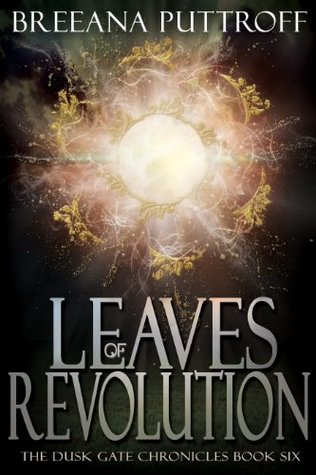 Goodreads Summary: Adapting to life in a new world would have been challenging in the best of circumstances, and Zander’s circumstances were anything but the best. Trapped in Deusterros with tragedy behind him and only the unknown before him, he wasn’t sure he would ever find his way back to the carefree teenager he’d been such a short time ago.
But with nowhere to go, and a new sort-of-family who needs him, Zander may just discover that his greatest strength will come from rising to the challenge.

Featuring the continuing stories of the entire Rose family – and now, Zander, too, Leaves of Revolution brings the Dusk Gate Chronicles full circle as one family fights for the destiny of two kingdoms.
Goodreads Rating: 4.43 stars with over 300 ratings
Genre Listing: Fantasy, Young Adult, Adventure, Romance
Get the Book: Amazon
Reviews on the rest of the series: Seeds of Discovery, Roots of Insight, Thorns of Decision, Blooms of Consequence, Canes of Divergence

I can not put this series down. I'm completely and hopelessly hooked at this point, but I'm sure you've gathered that by now. I've been finding myself sneaking every possible spare minute to read these books. It's a little ridiculous how attached to this I am.

Where Canes of Divergence was a lot of day to day and waiting. This book had a lot going on in it. The war ultimately breaks out, and our beloved friends are stuck right in the middle of it. I felt like this book showed an enormous amount of growth, specifically in Quinn and Zander. Each book I read makes me feel like Quinn gets stronger and stronger as a person and a ruler. I can hardly remember what she was like when the series started.

I think that Zander proved himself as a worthy character in this book. The previous books he was in, he was kind of annoying and I didn't care much for him. He's grown and become a character I enjoy reading about. I can even see where he and William are becoming friends, instead of just civil for the sake of those around them. Despite the circumstances, I'm glad to see that William and Nathanial were able to showcase their medical skills in this story. I was worried that William would have to give up a lot of that as the story continues, and I think that's a part of who he is as a character.

I will say, I believe that this book put everyone's loyalties to the test. It was hard to figure out who, aside from the inner circle, could be trusted and who couldn't be. It did a good job of keeping me guessing.  If you are patient and can afford to be involved with a series for the long haul, I can't recommend this series enough. With the way the action develops in this story, you need patience for it, but it is so worth it in the end.