Book Review of Queen by Right by Anne Easter Smith 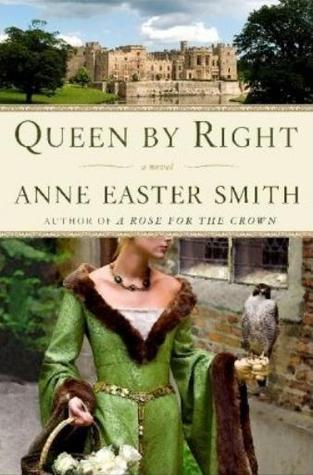 Goodreads Summary:  From the award-winning author of A Rose for the Crown, Daughter of York, and The King's Grace comes another masterful historical novel—the story of Cecily of York, mother of two kings and the heroine of one of history's greatest love stories.

Anne Easter Smith's novels are beloved by readers for their ability "to grab you, sweep you along with the story, and make you fall in love with the characters." In Cecily Neville, duchess of York and ancestor of every English monarch to the present day, she has found her most engrossing character yet.

History remembers Cecily of York standing on the steps of the Market Cross at Ludlow, facing an attacking army while holding the hands of her two young sons. Queen by Right reveals how she came to step into her destiny, beginning with her marriage to Richard, duke of York, whom she meets when she is nine and he is thirteen. Raised together in her father's household, they become a true love match and together face personal tragedies, pivotal events of history, and deadly political intrigue. All of England knows that Richard has a clear claim to the throne, and when King Henry VI becomes unfit to rule, Cecily must put aside her hopes and fears and help her husband decide what is right for their family and their country. Queen by Right marks Anne Easter Smith's greatest achievement, a book that every fan of sweeping, exquisitely detailed historical fiction will devour.

Hello, readers, I hope everyone had a fantastic New Years! I'm so glad I finally finished this book. I started it some time before Christmas, and just now got it done. I'll be honest; it's a bit of a slow read. Honestly, I wasn't all that impressed with Queen by Right by Anne Easter Smith. It's got some decent reviews, but it just didn't engage me like I had expected it too.

The timeline was hard for me to keep straight in this book. It starts in 1461 after Cecily is widowed and in mourning. It then flips between 1461 and her entire life once she met Richard. For me, it made it very hard to keep track of what was going on. Considering she met Richard when she was eight, that's a lot of time to cover. Once her children started getting introduced into the story, I had to frequently flip back to the family tree and list of characters to keep everyone straight. I think this took away from the story for me because I had to focus so hard on who was who.

I felt like Cecily started off as an adamant character, and I felt like she had a lot of emotion. The older she got, I felt like she lost that spark that made me initially like her. I think her reputation of being "Proud Cis" made her seem emotionless and a little unlikable. She came across as a little uppity, which given her position, I guess that's expected. I just really didn't feel a great connection to her. She had her moments where she was likable, but for the most part, I didn't feel anything to her one way or another.

I think what kept me most in this story is the timeline, and I wanted to see how it tied into other events. I've read a bit about the Plantagenet and Lancaster fighting, so it was interesting to get more perspective on it. Obviously, this is a work of fiction, but one thing I like about historical fictions is I can do some research and connect the fiction with what actually happened.

I did appreciate Cecily and Richard's relationship. I think their relationship was probably rare for the time. They were able to group up together as children, fall in love and then get married. It was still arranged, but I think they would have gotten married regardless. I think they showed a lot of respect for each other, and it was interesting to see them grow as a couple. I felt like they also showed a lot of love for their children. Aside, from Anne's beginning years. It seems like they tried to make each child feel special, which I imagine would be hard to do with their massive brood.

Overall, I liked the book, but it didn't wow me. I was more interested in the history than the story the characters were telling, and I think the lack of linear timeline made it hard to appreciate the story fully. On the grand scheme of things it's not on my list of favorite historical fiction books, but if you're a fictional history lover it's a decent read on a someone I think to be a lesser known historical figure.

Posted by Linz The Bookworm at 1:27 PM