Book Review of The Damned by Laura Thalassa 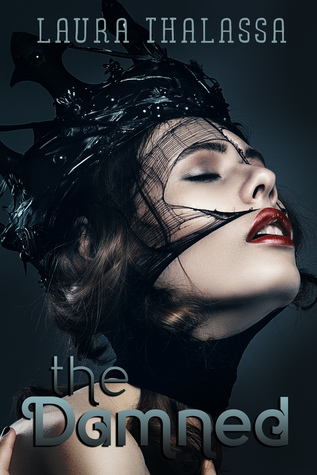 Goodreads Summary: Taken. Whisked away to hell. Forever bound to a monstrous god. This is seventeen-year-old Gabrielle Fiori’s fate. It’s everything she’s ever feared, and it has all come to pass.
Only … the devil isn’t the monster she remembers. At times he seems gentle and, most unnerving of all, she’s drawn to him. He wants her for all eternity, and if she gives in, everything he has to offer can be hers. The only cost? The last of her soul—and her humanity.

By a twist of myth, Gabrielle finds herself back on earth from dusk to dawn. Back where the living breathe, where Andre de Leon, the king of vampires and her former soulmate, await her. Yet she can’t help but feel that something’s wrong. She’s wrong. Her blood seeds demons and her powers can move earth and air and all manner of creation.

Now angels flood the skies, gods and demons are made flesh. A battle between good and evil is erupting, and if Gabrielle wants to escape hell and save the world, she’ll need to end it, once and for all.

I feel like I've found the holy grail right now. I read a series that had an actual ending to it! I'm serious; there wasn't any foreshadowing of things going on and on and on indefinitely! So exciting. I liked this series from The Unearthly, but The Damned made me LOVE the series. WOW. And not just because it finished the series and there was ending. That being said, I'll be honest; it wasn't the ending that I wanted.

In The Damned Gabrielle finds herself the current embodiment of Persephone, only so much more. She spends the days with the Devil and nights with Andre. Battling feelings for both of them, and struggling to find a way out of her situation. She now has more power than she knows what to do with and is fighting a war against herself.  Which side will win?

I thought that the character depth in this was fascinating, especially surrounding Gabrielle, Andre, and the Devil. Gabrielle seems like she is fighting against losing her humanity, but in reality, she's not only holding on to it fiercely, she's bringing in a more human side of not only Andre but also the Devil.  The latter surprised me, and because of it, I hoped for a different ending.

I try to stay away from spoilers in my reviews, but I'm not going to in this one. Mainly, because I desperately want to discuss the ending that could have been. The ending you get is the one you expect. It's the one that probably every book would go to, and it's understandable and makes sense. However, through all of the fighting and war Gabrielle brings out the good in the Devil- the God he once was. This will probably make no sense unless you've started reading the series, but in this book the mythology is that all of the gods from all religions are one and the same just different personas. So the devil is Pluto, Hades, Osiris, and even Gods before that. Gabrielle brings out a benevolent side of him, known as an old god named Asiri.  Before everything comes to its end, Gabrielle is given a glimpse of what could have been if she could have tamed the devil so to speak. Eons of happiness and reshaping the underworld into something better. I desperately want to read that story. So sue me, I like twisted things. Not sure what it says about me, but there it is.

Okay, back to the story that took place, and sorry for the spoilers. I needed to get that out of my system.  Oliver grew a lot in this one as well. I won't give spoilers on this one, but it gives it a fun finality to things. Leeanne was in this book as well, but for me, she was just kind of there. She had a lot of doings in seer things, but it didn't seem like it much mattered. It looked like a lot of it would have played out with or without her intervention.

All in all, everything was tied up in a nice predictable little package. Don't get me wrong; I liked it, and it makes sense, and I knew it was never going to go any other way. I just really want to be surprised by an ending sometime.  I am still giving it a five, because it was a great read.

I didn't highlight much of anything for quotes in this series, but there was one that I did highlight. Even though I didn't get the ending I wanted, I did love this quote from it.

"The Fates had woven our threads together. But we hadn't simply been given this love. We'd fought and earned it." - Featured in the Epilogue.  I. LOVE. THIS. QUOTE. Truly, I feel that is how every relationship should be and how the truly lasting ones are.