Book Review: What Preys Within by Brett Gurda 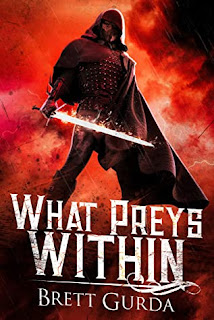 Goodreads Summary: Every soul harbors a war.
A dark prophecy claims its prey. An innocent child becomes the infernal’s key to unleashing the pits of Hell.

Eric Vayne, a former fighter fueled by wrath, is haunted by demons from years ago. Tragedy has aligned him with exorcists, against the infernal. Together, they venture beyond the veils of flesh to face down the devil’s chosen.

Unworthy heroes with darker pasts confront damning lies in the Holy See. These contemptible few raze against the gates of Hell, daring to kill the parasites that leave only ruin in their wake.

Embark on a fast-paced and gut-punching journey. Witness morally gray characters seeking truth in the shadows of Rome. Enter the fallen souls where demons reign.
Goodreads Rating: None, yet.
Genre Listing: Fantasy, Fiction, Exorcism
Goodreads Challenge: 20/60
Reading Challenge: #24 Free Space Pick any Book! (Find the full challenge here
Book Review:
I apologize in advance. The review for this is going to be kind of short. It's been a rough week and I'm fairly exhausted. This is sort of an author request or more aptly, one I offered to do. We connected on Reddit and I told Brett that I'd pick up his book on Kindle Unlimited. Honestly, I was interested when he described What Preys Within as a Horror/Fantasy Blend that includes Medieval combat with demonic possessions. It seemed like a really unique concept so I had to check it out.
What Preys Within caught my interest pretty quickly. Most of the story follows Eric Vayne a former fighter whose wife is possessed by demons, resulting in the death of their daughter Rose. The thing that struck me as the most fascinating part of this story is the way the possession works in What Preys Within. The possessed soul becomes a battlefield where Eric and the priests that accompany him to fight to save the guardian.
Right away there's a sense of pity for Eric and the situation he's in. As a reader, I could understand why he wanted vengeance, but also why he blamed himself. The name Wrath kind of follows him into the soul's battle. There was a pretty big twist in his story that I wasn't expecting. The ending made me wonder if this is going to be the start of the series. I won't really get into that because it will give spoilers.
Overall, I really liked What Preys Within. I thought it was unique and creative. It was easy to feel for the main character. I think the only thing is that I wanted more. Maybe a little more of Eric fighting within the souls prior to coming in contact with Damon. There's kind of a twelve-year gap where I think there could be some interesting suspense building.