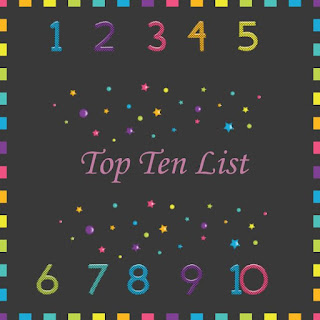 Hello, Readers! One of my followers suggested making Top Ten lists, and I wanted to give it a shot. I've got a handful of ideas for different lists, so this may become a regular feature. If you have a suggestion for a top ten list or another discussion post, please let me know!

I thought I'd start off with my favorite series. This one is actually really hard for me because I get sucked into series really easily. I'll try to give some reasons as to why each of these is on the list. I had to put a limit on myself, or otherwise, I'd end up listing every series I've ever read. If you've been reading my blog for a while, you probably have figured out that I go into binges frequently on whatever series I find on Kindle Unlimited. I tried to get these in some form of order, but truthfully favorites for me change depending on the day.

1.) Outlander by Diana Gabaldon- I am a sucker for historical fiction, which is weird because most of what I've been reading lately is fantasy/paranormal. I love the details that are given that make it feel realistic. I also like that this has a fantasy element with Time Travel.

2.) Harry Potter by J.K. Rowling- I feel like this is just a given. I got into this series in either Middle School or High School. I just have fond memories involving the books. This series has been a massive part of my life and one I still re-read every couple of years.

3.) Penny Green by Emily Organ- This is probably one of the few series that I'm mildly decent at keeping up with. It's available on Kindle Unlimited and follows a female reporter in the 1800s as she helps solve mysteries. I like that it's a quick read and keeps me entertained.

4.) Arch of Scythe by Neil Schusterman- This trilogy is just amazing. It's a unique Science Fiction that provides an interesting solution to population control when death has been conquered. It's witty and well written.

5.) Dresden Files by Jim Butcher- I love the world-building and snark in the Dresden Files. Each book is easy to get through and stays entertaining. It's action-packed, and I just love it.

6.) Caster Chronicles by Kami Garcia and Margaret Stohl- For me, a lot of my love for the Caster Chronicles is the different take on witches and other paranormal. This one refers to its witches as casters, and they all have their own unique power. There are also Incubus characters, which I feel are fairly unique.

7.) The Hollows by Kim Harrison- This could probably go higher on my list, but I don't know what I'd knock down if it did. The Hollows is a lot like the Dresden Files. Rachel, the main character, is a witch and bounty hunter who works with her vampire and pixie partners. I love the details provided in how Rache's magic works in The Hollows. Kim Harrison goes really deep into the explanation of when spells are created.

8.) Miss Peregrine's Home for Peculiar Children by Ransom Riggs- This series is just creepy, and I love it. It features odd photos that the author has acquired over the years, and the story is built around those photos. It's really different and entertaining.

9.) All Souls Trilogy by Deborah Harkness- I'm a fan of the academic approach to this series. Even though I don't fully understand a lot of the information surrounding Alcamey, I stay interested and always want to read more.

10.) The Infernal Devices by Cassandra Clare- The Infernal Devices is the prequel series to the Mortal Instruments. I love the sort of steampunk vibe that this series has, and we still get a lot of the Shadowhunter world. Plus, we get it without the drama that is Clary and Jace!

And since I had such a hard time narrowing it down, here's some Honorable Mentions! These are in no particular order.

Honorable Mentions:
11.) Sookie Stackhouse by Charlaine Harris- This could have potentially been higher on the list. It's probably one of the more impactful series in my life. I had been in a long hiatus from reading, and when my husband went to boot camp for the marines, I found I had a lot of time on my hands. A friend suggested this to me, and my love of vampires was sparked.

12.) House of Night by P.C. and Kristen Cast- I kind of have a love/hate relationship with how the main character is written in this one, but I like the different take on vampires. I love a lot of the side characters, and it always has kept me interested.

13.) His Fair Assassin by Robin La Fevers- I've meant to re-read this one for ages. I need to really get the books again since I don't think they are on KU anymore. Anyways, I can't really see any downside to Assassin Nuns, who serve a death god.

14.) Wheel of Time by Robert Jordan- The only reason this isn't higher is that I've only read two books of what? 15 books? It's growing on me, and I need to read the rest of the series.

15.) Hunger Games by Suzanne Collins- I had this on the main list, but knocked it down because of Mocking Jay. I loved it at the time, but I'm not sure if me still putting it on my favorite list is because the movies are always on, so it's fresh in my mind. I need to read the prequel.