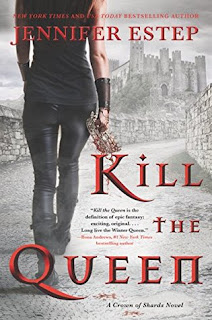 Goodreads Summary: Gladiator meets Game of Thrones: a royal woman becomes a skilled warrior to destroy her murderous cousin, avenge her family, and save her kingdom in this first entry in a dazzling fantasy epic from the New York Times and USA Today bestselling author of the Elemental Assassin series—an enthralling tale that combines magic, murder, intrigue, adventure, and a hint of romance.

In a realm where one's magical power determines one's worth, Lady Everleigh's lack of obvious ability relegates her to the shadows of the royal court of Bellona, a kingdom steeped in gladiator tradition. Seventeenth in line for the throne, Evie is nothing more than a ceremonial fixture, overlooked and mostly forgotten.

But dark forces are at work inside the palace. When her cousin Vasilia, the crown princess, assassinates her mother, the queen, and takes the throne by force, Evie is also attacked, along with the rest of the royal family. Luckily for Evie, her secret immunity to magic helps her escape the massacre.

Forced into hiding to survive, she falls in with a gladiator troupe. Though they use their talents to entertain and amuse the masses, the gladiators are actually highly trained warriors skilled in the art of war, especially Lucas Sullivan, a powerful magier with secrets of his own. Uncertain of her future—or if she even has one—Evie begins training with the troupe until she can decide her next move.

But as the bloodthirsty Vasilia exerts her power, pushing Bellona to the brink of war, Evie's fate becomes clear: she must become a fearsome gladiator herself . . . and kill the queen.

I typically try to stray away from any form of controversial topics, especially here. The recent events regarding the death of George Floyd and the protests going around the country hit close to home. I have a lot of friends and acquaintances from a lot of ethnic/religions/sexual orientations, and the thought of them feeling like they don't matter or matter less makes me sick to my stomach. At first, being just outside of Minneapolis, it was scary. But I realized, it's not about me or my fears. This whole conversation is about equality or lack thereof. I've spent a lot of time this week sharing information I thought was helpful to the conversation, checking on friends that were affected, and doing some reflection.

I consider myself an ally in most things. I want people to feel loved, respected, and safe to be themselves. That being said, I think that I can do better and do more. I believe to be better, I have to educate myself. I want to learn. So, I'd like to make a request for book recommendations. If you have a book by a black author or with a black main character, please let me know.

Similarly, June kicks off Pride season. If there's an LGBTQ author or book, I should check out let me know. Fiction and Non-Fiction are acceptable. Contact forms can be found on the side of the blog and include the contact form for this site, twitter, Facebook, and good reads. You can leave it in the comments as well. Just be respectful.

And now on to the review.

Rags to Riches for this is probably a generous category, but that's the good thing about the challenge. I feel like Tress, and I have left a lot of the categories up for interpretation. I feel like this one fits, but to explain why I'd completely spoil the book.

I got hooked into the story instantly. Kill the Queen follows Evie as she navigates life as a royal. She's a cousin to the queen and gets stuck with a lot of the jobs the other lords and ladies don't want. I felt like at first there were small glimpses of some cheekiness in Evie, but most of her personality was behind a wall. At first, I wasn't sure if this was due to just lack of development or something else, but as the story goes on, you find out that a lot of it is a wall she's felt like she's had to put up to survive. She ends up growing a lot, and I found her pretty likable by the end.

The concept of the Kill the Queen is really interesting. There's this whole survival of the fittest mentality within the royals depicted, and it's combined with a gladiator theme. Plus, there's magic. I liked the world-building in this book. Jennifer Estep takes the time to explain the history of the world she's created, and I loved the details in it. Little things like names being based on the equinoxes really caught my interest. I thought the magic was really cool and how there are different levels of magic that resulted in different things. You had your masters that could control materials, magisters who can control the weather, morphs who can turn into magical creatures like Ogres, and mutts who have enhanced senses.

There were a couple of surprises in the book, but I didn't feel particularly shocked by anything. When Evie gets attached to the gladiator troupe, she still has her wall up and doesn't trust them, but the transition from her not trusting them and trusting them felt mildly rushed. It was kind of like someone snapped their fingers, and it happened. It probably needed to be that way to progress the story, but at the moment, it seemed odd.

Overall, I really liked Kill the Queen by  Jennifer Estep. It was an interesting fantasy story, and I liked a lot of the components. There's a lot of times where right away, I feel like I have to go track down the next book in the series, but I didn't really feel that way with this book. It was good, I enjoyed it, and I'll probably read more of the series at another time. I just didn't feel like I had to right this second. There wasn't a huge cliff hanger that took me to that point.

Posted by Linz The Bookworm at 9:11 PM