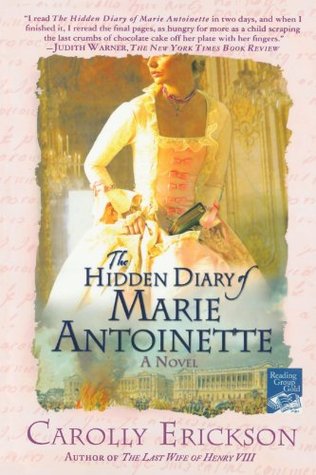 Goodreads Summary: Imagine that, on the night before she is to die under the blade of the guillotine, Marie Antoinette leaves behind in her prison cell a diary telling the story of her life--from her privileged childhood as Austrian Archduchess to her years as glamorous mistress of Versailles to the heartbreak of imprisonment and humiliation during the French Revolution.
Carolly Erickson takes the reader deep into the psyche of France's doomed queen: her love affair with handsome Swedish diplomat Count Axel Fersen, who risked his life to save her; her fears on the terrifying night the Parisian mob broke into her palace bedroom intent on murdering her and her family; her harrowing attempted flight from France in disguise; her recapture and the grim months of harsh captivity; her agony when her beloved husband was guillotined, and her young son was torn from her arms, never to be seen again.

Erickson brilliantly captures the queen's voice, her hopes, her dreads, and her suffering. We follow, mesmerized, as she reveals every detail of her remarkable, eventful life--from her teenage years when she began keeping a diary to her final days when she awaited her own bloody appointment with the guillotine.

Get the Book: Amazon, Book Depository

Hello, Readers! I hope that everyone is enjoying their holiday season! I actually finished The Hidden Diary of Marie Antoinette about a week ago, but I'm really behind on the doing of things. Marie Antoinette is regrettably a queen I've not read much on. I'm trying to branch out into reading about different historical figures.

Based on this book, I'm inclined to believe that Louis had some severe anxiety issues, which led to his failure as a king and ruler. I'm wondering how true this actually was, or if it was just invented for the sake of this story. I did appreciate that even though Marie Antoinette obviously was not in love with him, she came across in the story as having a fondness for him and friendship with him. I also thought it was interesting how Marie's affair was depicted and how it sort of made her a tiny bit less shallow, and in a way was what led her to try and do more for her people (in her own way).

I'm having a love/hate relationship with the book being in diary style. On the one hand, it made it much easier to read, and quick to get through. On the other hand, some of the scenes didn't seem plausible for her to have her diary with her let alone write in it. I realize I'm being petty, and I mostly enjoyed the style so I won't overthink it. I do feel that it gave the story a more personal feel, I'd be curious to read more historical fictions in this setup.  I know that Carolly Erickson has several other Historical Fiction works, and I'm probably going to add most of them to my want to read list. I'd also be interested in reading a story following Marie and Louis's daughter after their deaths.