Book Review of Almost a Queen by Laura Du Pre 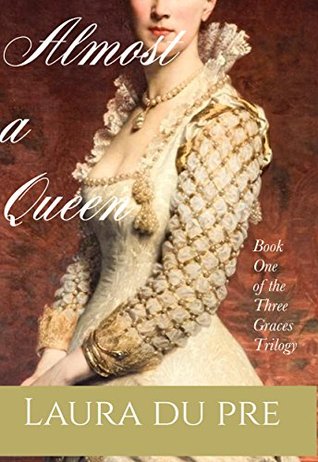 Goodreads Summary: Travel back to the court of the French Renaissance
Almost a Queen: Book One of the Three Graces Trilogy

Who wouldn't want to be Queen?

Cousins to the King of Navarre, the Cleves sisters, witness the glamour and danger of the French royal court firsthand. The youngest sister, Marie is trapped in an unhappy arranged marriage with her cousin, Henri, Prince de Conde. Determined to make the best of her situation, she awaits the wedding of the King of Navarre in Paris.

Paris of 1572 boils with religious war, and few will make it out of the wedding celebrations alive. Those that do survive face an impossible choice: convert or die. Will Marie and Conde make the decision to abandon their Protestant faith to save their lives? Will it cost them their souls?

Along with the threat of death comes a change for true love with the king's younger son, the Duc d'Anjou. Yet Marie promised to love honor and cherish her husband till death did them part. Will death part them soon? Is it possible to find love in the midst of tragedy?

Reading Challenge: #45 A book that takes place in another country

I devoured this book. There's no other way to say my reading habit with it. It was under 200 pages, and I did not put it down. I think I had it done in a couple of hours. I think the best thing about this book was that it didn't feel like it was as short as it was. I felt like Laura Du Pre was able to create great imagery in details without cutting corners. The pace of the story moves incredibly fast, but I was able to feel connected to Marie and the French Court.

In The Almost Queen, we follow Marie a young woman forced by her aunt to marry her own cousin Henri, Prince de Conde. It's an unhappy and mismatched marriage, but Marie tries to make the best of it while in the court of King Charles and Queen Elisabeth. She and Elisabeth become dear friends and confidants. During this friendship, she begins a friendship with Catherine de Medici's younger son the Duc d'Anjou. I really love how Du Pre portrayed this relationship. Marie tried desperately to hate the Duc d'Anjou since he was her husband's sworn enemy, but a friendship persisted, and eventually, a love grew out of it. I enjoyed that beyond words, they never acted on their love. I think it kind of gave a different spin on the ordinarily scandalous historical fiction romances. Despite her dislike of her husband, she did try to make it work and make peace out of duty to her aunt who had raised her.

Between the love triangle and the ongoing war between the Protestants and Catholics, I thought there was a fair bit of action packed into this short novel. It kept it interesting, and as I said before, I couldn't put it down. I tend to glance over Wikipedia after reading historical fictions like this, and while I don't consider Wiki a reliable source, the story did seem on par with the article regarding Marie, Princess de Conde.

I believe there are two other books by Du Pre about Marie's sisters. If I can get my hands on them, I plan on reading them. If you're looking for a short Historical Fiction, I definitely recommend this one.