Book Review of The Agincourt Bride by Joanna Hickson 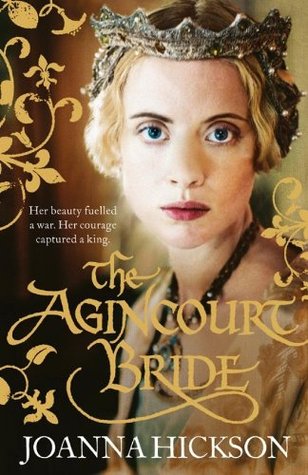 Goodreads Summary:
The epic story of the queen who founded the Tudor dynasty told through the eyes of her loyal nursemaid.
Her beauty fuelled a war.
Her courage captured a king.
Her passion would launch the Tudor dynasty.

When her own first child is tragically still-born, the young Mette is pressed into service as a wet-nurse at the court of the mad king, Charles VI of France. Her young charge is the princess, Catherine de Valois, caught up in the turbulence and chaos of life at court.

Mette and the child forge a bond, one that transcends Mette’s lowly position.
But as Catherine approaches womanhood, her unique position seals her fate as a pawn between two powerful dynasties. Her brother, The Dauphin and the dark and sinister, Duke of Burgundy will both use Catherine to further the cause of France.

Catherine is powerless to stop them, but with the French defeat at the Battle of Agincourt, the tables turn and suddenly her currency has never been higher. But can Mette protect Catherine from forces at court who seek to harm her or will her loyalty to Catherine place her in even greater danger?
Goodreads Rating: 3.79 Stars with over 1500 ratings
Genre Listing: Historical Fiction, French Culture, European Literature
Get the Book: Amazon, Book Depository
Book Challenge: #8 A Book about Royalty

I finished this a few days ago, and just now got a chance to sit down and post my review, so I'm sorry for the delay. The Agincourt Bride by Joanna Hickson was surprisingly delightful historical fiction. It was something I picked up for relatively cheap on Kindle, and I had a really hard time putting it down.

The story is narrated by Mette, who when the story starts is a young girl barely 15 years old. Her tale begins when she has just lost her first child and ends up becoming a midwife to the Royal Princess, Catherine. After a series of unexpected events, Mette finds herself rising above her station as Catherine grows from a princess to a queen.

I really liked Mette as a character and a narrator. I thought she was brilliant and had a lot of wisdom for her age. It was interesting to see the court life from a servant instead of just the royal character or a lady in waiting. I felt that Catherine was a strong character as well. She was witty, charming, and valued things like what someone was reading or how they treated someone.

The thing I appreciated the most about this historical fiction is it didn't make the time seem glamorous. It didn't skip over the unsavory parts of the time frame like the disease, rape, or unclean living conditions. It made it seem more realistic. I'm not saying that I necessarily want to read about those terrible things, but regarding historical accuracy, it feels appropriate.

I was really surprised by the living situation of the royal children when they were younger. It is not at all what I expected of princes and princesses, and there were a few spots in this book I gasped at the depravity they faced. Joanna Hickson does a fantastic job of making the reader feel 100 different emotions throughout this book.

Due to the length of this book, readers not only get to read about Mette being in service to Catherine but also Mette's husband and children. While I enjoyed reading about Mette's daughter Alyc, I kind of felt like Mette's husband and son got the raw end of the deal. There's something that happens to Mette's husband, and he ends up disappearing for a while and it felt like that part of the story could have been polished up a bit more. The same with her son. Sometimes it felt like Mette even forgot that she had a son, though it was interesting that he kind of ends up on the opposite side of the war.

Overall, I really enjoyed this book. It was nice to read about a royal character I haven't read about yet, and it gave me a chance to learn about the French court instead of the English court. It looks like this is a series, and if so I have every intention of checking out more of the books.