Book Review: Death at the Workhouse by Emily Organ 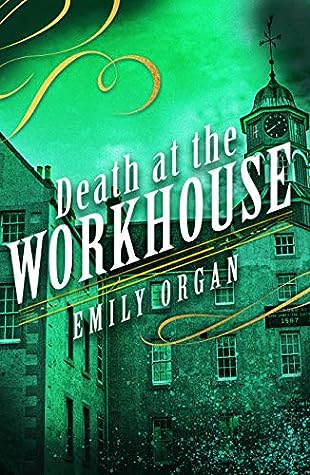 Goodreads Summary: London, 1885. Something’s not right at Shoreditch Workhouse, and reporter Penny Green is struggling to convince someone to listen. After spending time there undercover, she knows that more can be done for the deserving poor beneath its roof. But does anyone else care?
When two workhouse inmates die in a fight, the police and the coroner accept the simplest explanation. Penny undertakes her own investigation with Inspector James Blakely’s help, and it’s not long before they make themselves unpopular.

A macabre turn finally makes the authorities act, but can anyone stop the force behind the crimes?
Goodreads rating: 4.23 stars with just under 100 ratings
Genre listing: Historical Fiction, Mystery
Goodreads challenge: 22/50
2019 Reading Challenge: #24, Free space! Pick a book (find the full challenge here)
Reviews on the Penny Green Series: The Bermondsey Poisoner, The Curse of the Poppy, The Inventor, Limelight, The Maid's Secret, The Rookery, An Unwelcome Guest

Hurray! A new Penny Green book. I love this series so much, and Death at the Workhouse definitely did not disappoint. I eagerly await when a new one comes out, and I try to read it as soon as it comes out. For those of you who aren't familiar with this series, it's a Victorian murder mystery that follows the main character, Penny Green. Penny is a female news reporter in the 1800s, who has a knack for being involved in murder cases.  She and Inspector James Blakely often work together to solve cases. It's definitely not a cozy mystery, but I would consider it to be generally clean. The murders themselves get a little gruesome, but otherwise, it's pretty clean.

I love reading about Penny, and I feel like Emily Organ gives a lot of different views of what Penny's life is like. You see her life as a spinster renting a room in a boarding house. You see her life as a newspaper reporter, continually having to endure sexist comments from her peers because she's "of the fairer sex." At one point and time in the story, she's given a lady's column because she's the only female reporter and the editor things the women want a fashion article. At the same time, she's incredibly smart and observant. She usually figures out something is a miss before everyone else. She tries to use her reporting to help people and wants to report the truth even when it's hard. I adore her.

Per usual, I couldn't put Death at The Workhouse down. I think that the mysteries keep getting better and better because I honestly had no idea who was behind the murders and who was anonymously sending Penny books. I had my guesses but was utterly wrong. I'm a little ashamed at myself for completely missing the latter mystery.

I was really impressed with how grotesque this mystery got. Though, I use that more comparatively in regards to the other books in the series. I'd still consider it mild compared to other mystery authors. Anyways, the central mystery isn't so much that there are murders but what's happening afterward to the bodies. Death at the Workhouse by Emily Organ really gets into some interesting issues for the Victorian period and looks at the association between medical schools and the theft of corpses.

There's always an exciting side mystery within this series. I love this almost as much as the main plotline. In this series, it talks about the mysterious disappearance of Penny's father. I won't go into a ton of details because I don't want to spoil it, but there's a definite plot twist. Frankly, it's about time for some of the subplots to end up where they did. I don't think any of these were surprising but necessary. Confused? Good. Read it, and you'll understand.
The one thing I will say about the series is even though you'll see in places that you can read it out of order, I wouldn't. In terms of the main murders, yes there's no correlation there. However, in terms of Penny's life, relationships, and father's disappearance, I would want to read these in order.  There's a progression that I feel would be confusing out of order. Personal take, and not anything against the series though. Just something I think l should let other readers know about.