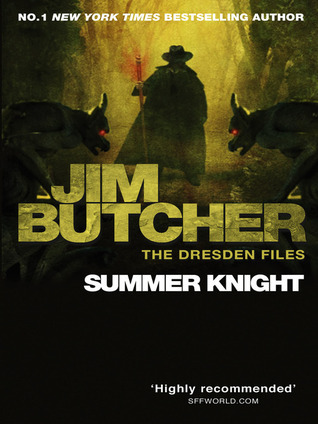 Ever since his girlfriend left town to deal with her newly acquired taste for blood, Harry Dresden has been down and out in Chicago. He can't pay his rent. He's alienating his friends. He can't even recall the last time he took a shower.

The only professional wizard in the phone book has become a desperate man.

And just when it seems things can't get any worse, in saunters the Winter Queen of Faerie. She has an offer Harry can't refuse if he wants to free himself of the supernatural hold his faerie godmother has over him--and hopefully end his run of bad luck. All he has to do is find out who murdered the Summer Queen's right-hand man, the Summer Knight, and clear the Winter Queen's name.

It seems simple enough, but Harry knows better than to get caught in the middle of faerie politics. Until he finds out that the fate of the entire world rests on his solving this case. No pressure or anything...
Goodreads Rating: 4.30 stars with over 110,000 ratings
Genre Listing: Fantasy, Urban Fantasy, Mystery, Fiction, Paranormal, Magic
Goodreads Challenge:  6/50
2019 Reading Challenge: #6 a book that takes place in Summer. (Find the full challenge here.)
My other reviews on the series: Storm Front, Fool Moon, Grave Peril

It always amazes me how I will have so many thoughts and opinions when I'm reading the book, but when it comes time to do the blog post I forget it all. Starting these posts are always the hardest for me.  I've wanted to read more Dresden Files for a while, so I was thrilled to see that Summer Knight by Jim Butcher was available from my Library's e-book section. I jumped right into it, and it felt like I had just finished Grave Peril. Butcher does such a fantastic job of reminding the reader of what happened in the previous book without bogging the newer book down. I was delighted this also takes place in June, so I could get #6 out of the way on the challenge. I'll try and do an update post on that soonish. I know that the partner in reading crime, Tress, is kicking ass and taking names on it. I, however, am 3 books behind. If you'd like to catch up with Tress, you can do so on her blog here.

I think the thing I love the most about the Dresden Files is the sense of humor. Harry Dresden is a super snarky main character. There were definitely some points in Summer Knight where I snickered or laughed out loud. One quote that really made me laugh was about 21% in. "I wanted to kick myself. Somewhere out there was a village I’d deprived of its idiot." I don't know that I would say that Summer Knight is a hysterical read, but it definitely has its moments where Harry Dresden is snarky and comical.

Plotwise, I think that it was a little predictable in terms of who was behind sort of framing Mab and actually stealing the mantle. I don't know that this really matters much, because even though it was predictable, I still enjoyed it immensely. Summer Knight is an action-packed story, and there's never a dull moment.

I loved the take on Faerie and all the characters involved in it. I thought it was interesting to see him interact more with Lea and get a little bit more of his crazy backstory. I felt like it had been rushed in some of the earlier books in the series. It was nice to see him interact with Elaine, the other members of the council, and have him and Karin back to relatively normal. I thought Ebaneazor and The Gate Keeper were fantastic character additions, and I hope that they get brought into the series somehow. I am anxiously waiting for Harry to get over Susan and try to develop something with Karin. I think the chemistry is there, and could slowly build there. I wasn't much of a Susan fan when she got introduced. She grew on me a bit, but I'd rather see something develop between Harry and Murphy.

I can't wait to read the next book in the series, but I think that's going to have to wait for a bit. I'm trying to get through Tier 1 in the challenge instead of jumping around like I usually do.  I still have my free spaces left, but I'm trying to save those for the once I'm running low on spaces.

Posted by Linz The Bookworm at 5:16 PM