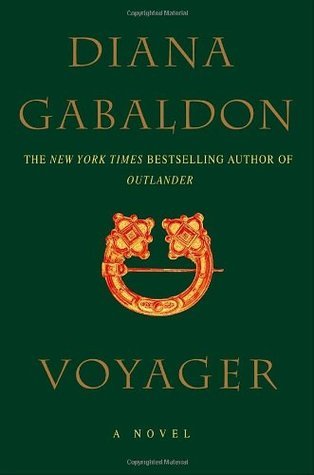 Goodreads Summary: From the author of the breathtaking bestsellers Outlander and Dragonfly in Amber, the extraordinary saga continues.
Their passionate encounter happened long ago by whatever measurement Claire Randall took. Two decades before, she had traveled back in time and into the arms of a gallant eighteenth-century Scot named Jamie Fraser. Then she returned to her own century to bear his child, believing him dead in the tragic battle of Culloden. Yet his memory has never lessened its hold on her... and her body still cries out for him in her dreams.

Then Claire discovers that Jamie survived. Torn between returning to him and staying with their daughter in her own era, Claire must choose her destiny. And as time and space come full circle, she must find the courage to face the passion and pain awaiting her...the deadly intrigues raging in a divided Scotland... and the daring voyage into the dark unknown that can reunite—or forever doom—her timeless love.
Goodreads Rating: 4.39 with over 221,000 ratings
Genre Listing: Historical Fiction, Romance, Fantasy, Fiction, Time Travel
Goodreads Challenge: 5/50
2019 Reading Challenge:  #9 A book that has been turned into a TV series or Movie (Find the full challenge here.)
My previous reviews on the series: Outlander, Dragonfly in Amber

Ahh. I finally finished Voyager. Anytime I finish a book this long it feels like such a huge accomplishment because I usually read books that are less than 400 pages. The downside is now Goodreads is telling me that I'm behind. So rude.

This is mostly going to just be me gushing about Voyager because I ABSOLUTELY LOVED IT. So far, this is my favorite book in the Outlander series. I think that Voyager gave me everything I had been wanting in the first two books. Not that I didn't love Outlander and Dragonfly in Amber, but Voyager is just so adventure-y and wonderful.

I really loved that Diana Gabaldon gave us a brief glimpse of Claire and Jamie's lives without one another. I think it just made their reunion much more enjoyable and fantastic. One of the things that I was happy to see, even though it was incredibly sad, was Claire's life with Frank once she came back from the past. It was interesting to see Claire try to cope with coming back to her present time as well. I got the sense that until she became a doctor, she didn't really feel useful and felt pretty overwhelmed from just mundane everyday things.

Jamie went in full outlaw mode without Claire, and I was more interested in his 20 years without Claire once I got into it. He just had to endure so much loneliness and, while Claire did as well, she at least had some distraction from that loneliness. I felt like with Jamie it was just in everything he did. I did find it interesting how he just becomes sort of the Laird almost for the men he was in prison with.  He just seemed to naturally become their leader and protector. His friendship with John Grey was fascinating to me. I've been told I need to check out the books revolving around Grey as well. Ah the TBR list continues to grow and never actually shortens.

There was so much adventure in this book! I don't even know where to begin with it! Smuggling, Brothels, Pirates, and Traveling! I don't know that I was ever bored while reading this. I loved how much Voyager got into the theory behind time traveling. This was another thing that I had been really hoping for since I started reading the series. Obviously, there are a lot more theories to discover, but what was in Voyager definitely satisfied me.

I feel like this entire book was 800 pages of six degrees of separation. Obviously, there was always a genealogical connection with Frank and the Randalls, but Voyager went way beyond that. So many characters that have previously been in the story in some minor capacity came back in this book, and it made it so interesting. There was a lot of me messaging my friend Tress, who got me into the series, and saying "Holy shit, so and so is back!!!" I was just amazed throughout the entire book.

I wanted to instantly move into the fourth book of the series, but alas all of the e-book copies are checked out at my library. I may or may not be pouting about not being able to read it yet. Ah well, I suppose I'll find something else to read in the meantime. There's so much more that I want to say about this book, but I feel like all I will do is discuss spoilers. I absolutely loved it, and welcome anyone  to give their thoughts in the comments!

Posted by Linz The Bookworm at 8:56 PM