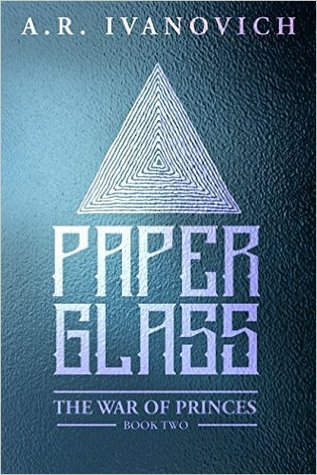 Goodreads Summary: Surviving a narrow brush with death convinced Katelyn Kestrel that she must never return to the war-torn Outside World. Safe again within the sanctuary of Haven Valley, she has forced herself to forget Rune Thayer, the young Dragoon soldier who had sacrificed everything to save her.
Katelyn’s struggle to adapt to a peaceful life is undone when she is assaulted by a classmate, triggering her powers with devastating consequences. The authorities learn of her rare Abilities, and a web of troubling mysteries unravels around her. She finds that an unfortunate twist of fate has delivered Haven prisoners to the Prince of Shadows, and he will stop at nothing to discover the valley’s secret location. Katelyn must find and rescue the captives or witness the destruction of everything she has ever loved.
Goodreads Rating: 4.15 stars with just over 1,000 ratings
Genre Listing: Fantasy, Young Adult, Science Fiction, Dystopia, Steampunk
Goodreads Challenge: 4/50
2019 Reading Challenge: #2 Read a YA Fiction (See the full challenge here.)
My Reviews on the city: Haven

So, I did a little rearranging on my challenge. I realized that Haven, the first book in the series, has a Tree on the cover. So, Haven is now taking up #58 so that I don't have to find another tree book. This also will save me some free spaces when I finish the series. Is it cheating? Maybe. Do I care? Not really.

I felt that Haven moved really slow when I read it, but Paperglass moved quickly. It takes place several months after Haven when Katelyn is trying to regain a sense of normalcy. I liked the pace set in Paperglass. Since I was already familiar with the characters and the scene, it was easy to get into.  I think where Haven is more of getting into the characters and the world, Paperglass gets into the history and the political structure. I really appreciate the steampunk details in both Haven and Paperglass. However, there's quite a bit more of it Paperglass. The world really starts to feel like what I would imagine a steampunk world to be like.

I really enjoyed that Katelyn and Dylan were forced into working together. The lack of trust they have for each other really shows, and I liked the dynamic it caused in the story. I actually thought a lot of their interactions were comical. I thought Sterling's inclusion was interesting as well. I'm really hoping that's his name because I'm drawing a blank at the moment. Anyways he was sort of a love/hate character for me. His earlier actions made me hate him, but his later actions made me love him. Rune was fairly neutral for me in this book. I'm excited to see where his story with Katelyn goes.

I think what I enjoyed most about Paperglass is the details. I mentioned it briefly earlier, but I really liked the world building in this book. It got into the background stories about the powers, especially within Haven and how they've been kept a secret. I liked the mystery behind how people got their information about the outside world. I thought it was a fascinating story development. I definitely can't wait to read the next book in the series. This is easily one of the better Steampunk worlds I've read.

If you want a good fantasy that's not a massively huge book, I definitely recommend this. Haven builds slow, but the pace in Paperglass is really fast and action-packed. The characters are enjoyable and have a nice depth to them, but the world-building  details are where it's at.