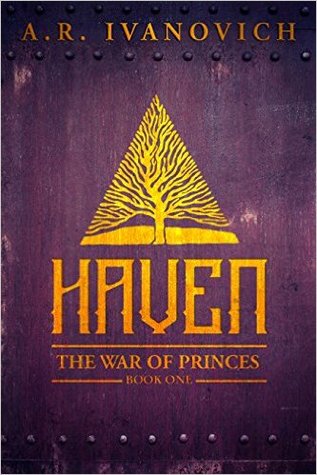 Goodreads Summary: From missing socks to missing people, nothing could remain hidden from seventeen-year-old Katelyn Kestrel for long, but after locating a forbidden passage out of her isolated country, Haven, she discovers for the first time that there are some things that should never be found. Outside the safety of her homeland's borders, Katelyn meets Rune, a young soldier who will die without her immediate aid. She never considered that helping him would lead to her capture. While being held prisoner by the handsome Lord Dylan Axton, she learns that the outside world is rife with war and controlled by people with extraordinary powers. It becomes clear that there was a very good reason the founders of Haven locked their people away from the rest of the world. The depth of her peril reaches a fever pitch when a ruthless Commander wants Katelyn dead. Her only hope is to return to Haven, but can she survive long enough to find her home?
Goodreads Ratings: 3.89 stars with over 2200 ratings
Genre Listing: Fantasy, Young Adult, Science Fiction, Steampunk, Dystopian
Goodreads Challenge: 3/50
2019 Reading Challenge: #2.) Read a YA Fiction (find the full challenge here)

Woohoo! Book three of the year is complete! For those of you wondering what order I'm doing the 2019 challenge that Tress and I created, I'm kind of just going at it with reckless abandon. I have a hard time deciding what I'm going to read ahead of time. I kind of just go with what sounds interesting at the moment. I am trying to be a little more structured about it this year, as opposed to 2018 and have an idea of what category I want to try and cross off when I go looking for a book.

Given that YA Fiction is my go-to genre for reading, I figured this would be an easy category to get out of the way. Enter Haven, an odd series on Kindle Unlimited that caught my attention. At first, Haven felt kind of familiar in a generic sort of way. I knew I hadn't read the story before, but I felt like I had. It starts with Katelyn's life in Haven and how they'd been isolated for 750 years. It doesn't really go into why just kind of a blanket that's the way it is and no one leaves. It was interesting enough, but the beginning of the story didn't wow me. I kept feeling like it was familiar and a little generic. My brain sometimes oddly associates things, and when I was reading it, I couldn't stop thinking about the later seasons of the show The 100. Once Katelyn reaches the outside world, and these different towns and kingdoms are fighting. That combined with the abilities aspect of the story made it feel like a druid-esq version of the show.

Somewhere around 150-200 pages in, the pace of the book changed for me. It started to really pick up, and I got really interested in the story. I think it was around the time that Katelyn began to really get into with her abilities. I really like how defiant Katelyn was and how she tried to cover things with humor. I always felt sketched out by Dylan even from the beginning of his appearance. He seemed like he was trying too hard to win Katelyn over. It just didn't seem natural. Not to give too much away, but I feel like a show of cowardice is almost worse than what the villain usually does. I liked Rune and Katelyn's connection with him. I kind of felt like their abilities matched each other. I liked the struggle that Rune showed with having to be an isolated Dragoon as well as being a person.

I really enjoyed the world building that was presented in Haven. I thought that A.R Ivanovich did an excellent job of really keeping Haven and the outside world separate. Haven was very much isolated by the Mountains, and even though it was a steampunk world it definitely felt more relatable and "normal" of the two. Haven was very community oriented, and everything was for the good of the people, but there were houses and families, jobs and school, and teenagers being dicks to one another. The outside world is completely different and felt like the warzone that it is. The outside seemed a lot more steampunk and pieced together. I pictured it dingy and dirty with things just being built out of what was laying around. Given the steampunk theme, I thought the idea of commanders losing their humanity and having it replaced with metal was interesting and creepy.

I loved the idea of the lurchers and the little shadow creatures. I thought they were both creative and were nice touches to the world. The little shadow creatures sound adorable, and the way they were described as wearing the abilities made me picture Pascal from Tangled as a shadow wearing electricity as clothes. I really wasn't kidding when I said my brain makes weird associations, by the way. I'm going to blame insomnia, but it's probably just the fact that I'm weird.

I would say that if you are looking for a good steampunk fantasy with a lot of interesting world-building details, this is a good option. It's under 400 pages, so it's not particularly daunting, but if you need to be drawn into the story right away, it may be a challenge. It's an interesting story, and I enjoyed it quite a bit, but it starts out relatively slow. It's worth giving it a chance though. As soon as I finished Haven last night I downloaded the second book because that's kind of my thing with series.

Posted by Linz The Bookworm at 8:58 PM