Book Review of Dorothy Must Die by Danielle Paige 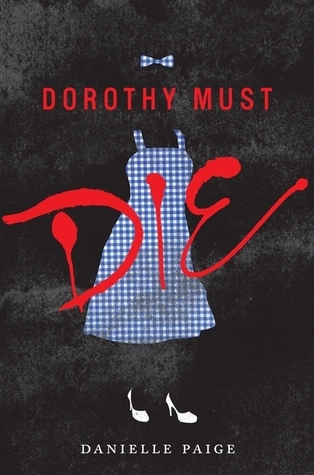 Goodreads Summary:  I didn't ask for any of this. I didn't ask to be some kind of hero.
But when your whole life gets swept up by a tornado—taking you with it—you have no choice but to go along, you know?

Sure, I've read the books. I've seen the movies. I know the song about the rainbow and the happy little blue birds. But I never expected Oz to look like this. To be a place where Good Witches can't be trusted, Wicked Witches may just be the good guys, and winged monkeys can be executed for acts of rebellion. There's still the yellow brick road, though—but even that's crumbling.

They say she found a way to come back to Oz. They say she seized power and the power went to her head. And now no one is safe.

My name is Amy Gumm—and I'm the other girl from Kansas.

I've been recruited by the Revolutionary Order of the Wicked, and I've been given a mission:

I'm pretty much a sucker for anything Wizard of Oz-related, but I had some skepticism going into Dorothy Must Die by Danielle Paige. The beginning of the story really didn't help my suspicion. The introduction shows off Amy's life and how dismal of existence it is. Danielle Paige does a decent job of getting us to feel sorry for Amy, but the specifics felt really cliche to me. Dad left when she was a kid, mom got into a car accident and addicted to drugs, potentially starts whoring herself out at bars. They live in a trailer park, and Amy's not only bullied at school, but her mom resents Amy just for existing. I'm not saying that these stories don't exist, but it just felt really overdone.

There's a huge part of the story that I thought was odd, but interesting at the time. Looking back, I suppose it had to be this way to progress the story, but in Dorothy Must Die the events of the Wizard of Oz actually happened. Amy and other characters frequently compare and contrast this new version of Oz with the movie and book Oz. I thought there were a decent amount of references to the original book and movie, as well as the one that came out a handful of years ago. It was just odd to read the main character acknowledging the fictional version and accepting that it happened. I won't say that Amy accepted it too readily, but I expected more of a struggle with the concept.

I think that since this is a series, it's going to give way to slow character development. I don't know that I was really wowed by any of the characters. They served their purpose, but I wouldn't classify any of them as great characters. Truthfully, the writing isn't great either. This entire book feels like a really cheesy action movie that you know is going to be bad, but you love it anyway because of how entertaining it is. For the record, I feel really bad saying this, and I realize I'm coming across as I didn't like it. This isn't the case at all. I actually really loved the story and the concept.

While the writing leaves some to desire there's actually quite a few humorous bits. I loved that the crimes were things like "Crimes of Sass". I've got a handful of quotes gathered from it, but instead of putting them on here they are released on my Goodreads account. Be sure to add me on there if you are a member!

If you are looking for some writing masterpiece, this is not the book for you. It's not terrible, it just leaves a lot to be desired. It very much reads like an author's first novel. Which is fine, we all have to start somewhere. However, if you want a highly entertaining spin on a classic, this very well may be a story for you. The way that Danielle Paige turns Oz upside down is exceptionally creative. There were a lot of twists and turns, and she somehow made her Oz more grotesque than the original. I honestly couldn't put the book down, and I loved how the Wizard's gifts in the original have now become the source of evil in Dorothy Must Die. I'll definitely be revisiting the series as I can. The Wizard of Oz nostalgia and the entertainment fact are what's getting me to give this four stars.

Posted by Linz The Bookworm at 9:24 PM