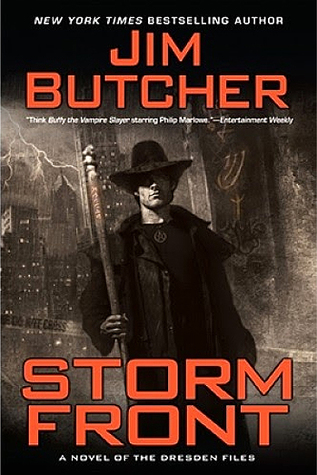 Harry Dresden is the best at what he does. Well, technically, he's the only at what he does. So when the Chicago P.D. has a case that transcends mortal creativity or capability, they come to him for answers. For the "everyday" world is actually full of strange and magical things—and most don't play well with humans. That's where Harry comes in. Takes a wizard to catch a—well, whatever. There's just one problem. Business, to put it mildly, stinks.

So when the police bring him in to consult on a grisly double murder committed with black magic, Harry's seeing dollar signs. But where there's black magic, there's a black mage behind it. And now that mage knows Harry's name. And that's when things start to get interesting.

Magic - it can get a guy killed.

Get the book: Amazon, Book Depository

Reading Challenge:31. A book recommended to you on social media

Oh boy. I don't even remember what day I finished reading Storm Front by Jim Butcher. It's been a long week, and I for one am beyond ready for the four day weekend. Also, bring on the Thanksgiving food.

Storm front, the first book in the Dresden Files, was recommended to me by my friend Tress. She's been trying to get me to read it for some time now, and I finally got around to it! Hurray! I always get a little nervous reading books that people recommend to me. I'm worried that if I don't like it, I'll hurt the person's feelings. Luckily, that wasn't the case here as I very much enjoyed Storm Front.

I really liked the sarcastic snarkiness that Harry provided. It made the book fun to read, and I think it's what really made the book for me. Dresden reminds me of someone, but I can't for the life of me think of who. It's going to bother me until I can figure it out. I'll be honest, I was rooting for Harry and the detective (Karrin? Her name is escaping me at the moment) to get together. I thought they had a fun bit of banter with one another, so I'm curious to see where that goes in future books.

I thought that the mystery of the story was fairly predictable, but I still enjoyed reading it. The actual killer's personality was kind of lost on me though. The reason he was after Dresden was lost on me. I'm not really sure if that's because it just wasn't memorable or because my brain has been shot lately. It could be both. I enjoyed that even though it was a bit predictable, it wasn't serious. I like that humor was included in different scenes, whether it was his banter with Bob or having to fight in sweatpants. It made the book really enjoyable.

I have a lot of questions regarding the magical world Dresden creates. Mainly how does one become a wizard? Do they have to have some magical ability before they can study? Can anyone become a magician so long as they study? I think if I had these details it would have made it a bit more enjoyable for me. I didn't dislike it, I just wanted a little more background information to really surround myself in the world Jim Butcher created.  There were parts where the lack of details made it feel almost like I was reading the second book in a series instead of the first, especially with the background story as to why Morgan was essentially baby sitting. It seemed sort of brushed over for me, and kind of like a catch up I'd expect of a later book in a series.

Overall, I really enjoyed Storm Front, and I'll definitely be reading more of the series. I've been told it gets quite a bit better, so that has me intrigued since I already like it quite a bit.

Posted by Linz The Bookworm at 9:23 PM