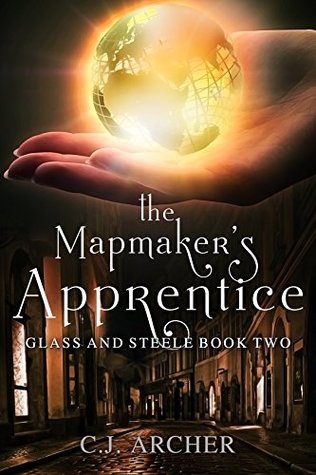 Goodreads Summary: When an apprentice from the Mapmakers' Guild goes missing, Matt and India are employed to find him. Going undercover as a married couple, they discover that not everyone at the guild is what they seem, and the lad's unearthly maps caused jealousy, suspicion, and fear.
With one of the apprentice's magic maps in their possession, India and Matt must use their wits and India's fledgling, untried magic to find him. But the more they investigate, the more sinister plots they uncover, including a link between the Mapmakers' and Watchmakers' Guilds, and an ancient magical treasure buried beneath the streets of London.

As the net of suspicion widens and enemies draw closer, it's not just the apprentice's life that's in danger, but Matt's too. Someone will go to great lengths to prevent him discovering the name of the man who can fix the watch keeping him alive. Great lengths indeed.
Goodreads Rating: 4.02 stars with over 4,000 ratings
Genre Listing: Fantasy, Mystery, Romance, Historical, Magic, Historical Fiction
Previous Review on the series: The Watchmaker's Daughter
Goodreads Challenge: 8/60
2020 Reading Challenge: #54A book with an occupation in the title (Find the full challenge here)

I hadn't actually planned on putting this book at #54 when I started reading it at like two in the morning. Truthfully, at that point, I was just so into the story of The Watchmaker's Daughter that I had to continue it. It dawned on me the next day that Mapmaker would be a profession. The Mapmaker's Apprentice starts up shortly after the first book ends. India and Matt are still on the search for Chronos, but they've been employed by the Police Commissioner for an undercover job to find his missing son.

I was actually surprised by the mystery in The Mapmaker's Apprentice. I thought that it was a little predictable in The Watchmaker's daughter, so this was a pleasant surprise.  I really had no idea who ultimately was behind the disappearance. At one point the two guilds become slightly linked, and I thought that was interesting. I'm curious to see if it develops more in the next book. Based on how The Mapmaker's Apprentice ended, I think it will be a continued theme throughout the series.

Throughout the story, Matt's aunt is trying to set him up with all of the eligible young ladies in London. I found this comical. In a lot of books I've read you get to see the woman's perspective about being forced into finding a husband, but I've not really read it where the man is getting paraded around to find a wife. This results in some jealousy from India, though she tries to hide it. The tension between her and Matt in this book is palpable. I'm guessing this is going to drag on throughout the series.

The magic finally gets discussed more in The Mapmaker's Apprentice. I was glad that it actually showed up in this story. India intentionally uses it at one point, which I enjoyed. I really felt like India really kind of found herself a bit more in this book. The first book she was a little lost after going through her father's death and her split from Eddie. In this book, she starts standing up for herself and speaking her mind. Matt is fairly controlling and she puts a stop to it whenever it happens.

This is definitely going to be a series I continue to read. I'm going to force myself to grab something that fits in a category and I already own, however. I could easily go into one of my binge-reading episodes with this series. It's a quick read, fun, and interesting.