Review of Aaru by David Meredith 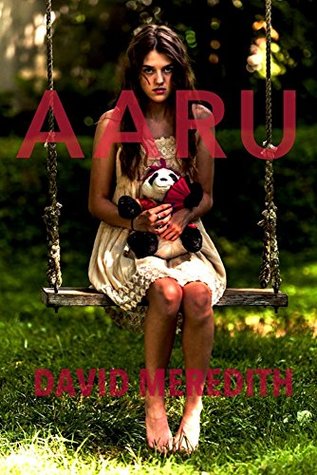 Rose is dying. Her body is wasted and skeletal. She is too sick and weak to move. Every day is an agony, and her only hope is that death will find her swiftly before the pain grows too great to bear.

She is sixteen years old.

Rose has made peace with her fate, but her younger sister, Koren, certainly has not. Though all hope appears lost Koren convinces Rose to make one final attempt at saving her life after a mysterious man in a white lab coat approaches their family about an unorthodox and experimental procedure. A copy of Rose’s radiant mind is uploaded to a massive supercomputer called Aaru – a virtual paradise where the great and the righteous might live forever in an arcadian world free from pain, illness, and death. Elysian Industries is set to begin offering the service to those who can afford it and hires Koren to be their spokes-model.

Within a matter of weeks, the sisters’ faces are nationally ubiquitous, but they soon discover that neither celebrity nor immortality is as utopian as they think. Not everyone is pleased with the idea of life everlasting for sale.
What unfolds is a whirlwind of controversy, sabotage, obsession, and danger. Rose and Koren must struggle to find meaning in their chaotic new lives and at the same time hold true to each other as Aaru challenges all they ever knew about life, love, and death and everything they thought they really believed.

Get the book: Amazon

First things first, I received an e-copy of this book from the author in exchange for an honest review.

Thanks, David for sending me a copy of your book! Readers, if you think that the name David Meredith sounds familiar I've also reviewed his book Reflections of Queen Snow.

I made a point to finish this book last night because I knew I only had 15% left at most. I've been trying to gather my thoughts on Aaru. I'm very conflicted on how I feel about this book because a lot of parts in this book shook me to my core for very different reasons. Aaru starts by following Rose, who is a teenage girl bedridden in a hospital, dying of cancer. During the first few chapters, I cried a lot. Rose passing really pulled at all of my heartstrings and then at first I resonated with Koren a lot. It brought back an influx of memories from when I was 17, and my mom passed. I related to Koren in the wake of Rose passing, because once upon a time, I was her. Death of someone close to you can definitely change you. David Meredith has an outstanding ability to play with a person's emotions.

On the flip side, of this, there were some emotional scenes that I honestly could not handle. I found the entire portion of the story with "Magic Man" completely repulsive. I almost didn't finish the book because of it. A lot of me taking so long to finish this book was because I had to put it down and get away from this character. I'll be honest, I was angry at the author for asking me to read this. The thing is, it's not that it was badly written. It's because of how flat-out creepy and terrifying Magic Man was as a character. It just took me putting the book down for a month or so to realize it. I'm still repulsed, but I'm assuming the intent, and really it makes for an incredibly well written and vile villain.

My slight interest in psychology is kicking in with this book. I'm trying to tame it, so I don't go full nerd on everyone. I really liked the concept of being able to save one's spirit and be able to communicate with the person still after death. I'm a little bit obsessed with death and the spirit world, so this really peaked my interest. I really liked how the residents of Aaru were able to create everything, and some even had obligations to welcome new residents.

There were some things that I generally disliked about the book as well. The way that Askr's accent was typed out made his scenes very hard to read for me. I think it could have just been explained once and then just assumed. I also didn't really like how Koren was portrayed once she got famous. At first, I thought that it didn't seem realistic, but then when I came back to the book, I realized that is probably how fame happens, especially given some of the tragedies that befall child stars.I think this goes back to me being repulsed by Magic Man.

Overall, Aaru sent my emotions on a complete rollercoaster. I'm really impressed with David Meredith's ability to make his books so emotional. I want to hate this book because of how repulsed I was with half of it, but I can't because it was incredibly well written and was a really interesting story. I would say that if you do read it, to really prepare yourself properly.

Posted by Linz The Bookworm at 4:09 PM