Book Review of The Merciless by Danielle Vega 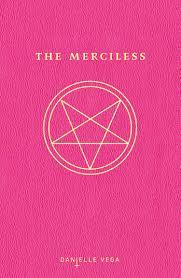 Goodreads Summary: Forgive us, Father, for we have sinned
Brooklyn Stevens sits in a pool of her own blood, tied up and gagged. No one outside of these dank basement walls knows she’s here. No one can hear her scream.

Sofia Flores knows she shouldn’t have gotten involved. When she befriended Riley, Grace, and Alexis on her first day at school, she admired them, with their perfect hair and their good-girl ways. They said they wanted to save Brooklyn. They wanted to help her. Sofia didn’t realize they believed Brooklyn was possessed.

Now, Riley and the girls are performing an exorcism on Brooklyn—but their idea of an exorcism is closer to torture than salvation. All Sofia wants is to get out of this house. But there is no way out. Sofia can’t go against the other girls . . . unless she wants to be next. . . .

In this chilling debut, Danielle Vega delivers blood-curdling suspense and terror on every page. By the shockingly twisted end, readers will be faced with the most haunting question of all: Is there evil in all of us?
Goodreads Rating: 3.62 with over 7,000 ratings
Genre Rating: Horror, Young Adult, Paranormal, Exorcism
Get the book: Amazon, Book Depository
2017 Reading Challenge: #19 A book you chose because of the cover

I've meant to read The Merciless by Danielle Vega for a while. I originally saw it on Net Galley when I was still active on there. I had no clue what it was about but wanted to read it because it was girly pink with a pentagram. Literally, the only reason I wanted to read it. Eventually, I learned it was about Exorcism, and that got me a lot more intrigued. The best way I can describe this book is the movie Mean Girls had a relationship with the movie The Craft and had an affair with Pretty Little Liars, and the result was The Merciless.

I feel torn on this book. I like the idea of it, and the sequence of events was fascinating, but I hated the characters. All of them. I don't feel like there were any strong characters or even had any redeeming qualities. All of the characters felt extremely one dimensional to me. There wasn't anything to connect me to them what so ever. You get very little detail about any of their lives, and they all seem incredibly fake. I think the only character I actually liked was Sofia's grandmother and the only word she says in the entire book is "Diablo."

I know some of this was probably meant to create some mystery revolving around their sins, but the lack of detail just made the characters feel like placeholders. Had there been some character development, I think it could have been a really interesting book. It definitely was twisted, but being messed up and gory isn't enough to make me love it or really even like it. The only reason I actually finished it was because it was so short and it was the book I said I was definitely going to read this month. I felt like Sofia's big sin was predictable. Grace and Riley's sins were underwhelming. Alexis' sin was the only one that actually shocked me, but she kind of gave off the psychopath vibe anyways. Brooklyn was just weird.

Maybe I had too high of hopes for this, but I was just really unimpressed with the whole story. Don't even get me started on the relationships. Or why Riley has it out for Brooklyn. I'm not going to make any promises about reading the second book in the series. I don't really have any desire to at this time, but stranger things have happened.