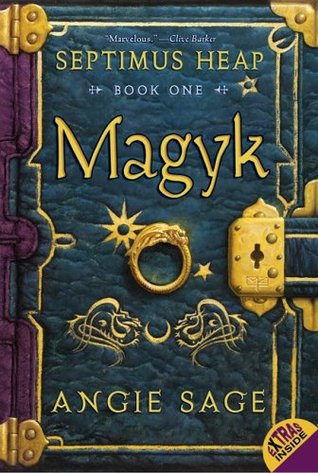 Goodreads Summary: The seventh son of the seventh son, aptly named Septimus Heap, is stolen the night he is born by a midwife who pronounces him dead. That same night, the baby's father, Silas Heap, comes across a bundle in the snow containing a new born girl with violet eyes. The Heaps take this helpless newborn into their home, name her Jenna, and raise her as their own. But who is this mysterious baby girl, and what really happened to their beloved son Septimus?The first book in this enthralling new series by Angie Sage leads readers on a fantastic journey filled with quirky characters and magykal charms, potions, and spells. Magyk is an original story of lost and rediscovered identities, rich with humor and heart.
Goodreads Rating: 3.8 stars with over 88,000 ratings
Genre: Fantasy, Young Adult, Magic, Fiction
Get the Book: Amazon, Book Depository
2017 Reading Challenge: #13 The first book in a series you've been meaning to start

I've wanted to start this series for so long, and I'm so glad I finally did. I think I was halfway done with it and had already started to recommend it to a few of my friends. I think if J.K. Rowling, Sir Terry Pratchett, and Douglass Adams all got together and wrote a book it would be Magyk by Angie Sage. It's just so quirky and adorable. It was hard not to love.

There wasn't really anything about this story that I disliked. I will admit that the mystery around which of the potential boys were actually Septimus Heap was fairly predictable, but it didn't really detract from the story. With it being a kid's book, I didn't really expect a ton of surprises in the plot. That being said, I thoroughly enjoyed it.

The Heap family reminded me a bit of the Weasleys. They're kind of oddballs but in a charming sort of way. I enjoyed the legend of the seventh son of the seventh son. It seemed really fitting for a book about wizards. The characters were likable, but honestly, they weren't what made me love this story. For me, it was the details.

I'm a sucker for details, so this book basically was heaven for me. Everything was described so well, and I loved every minute of it. From the weird community that the Wizards lived in, to the details of spells and how they're bolded throughout the story and even the thought process of every character mentioned. I love that if it mentioned Maxie or Messenger Rat or Boggart,  even the Python it talked about what they were feeling or thinking at the moment. I love that Zelda has a pet duck that's actually a cat. Everything had it's own little story and personality.

I thought it was really cute at the end. It ends how it's supposed to but gives you random afterthoughts on some of the less important characters. I thought that it was very clever. I think this book could stand on its own, but I definitely want to read more in the series. It's got a really nice sense of humor to it and is all around an easy read. It was 500+ pages but didn't really feel like it because I was so entertained by it.