Book Review of The Girl Who Came Home by Hazel Gaynor 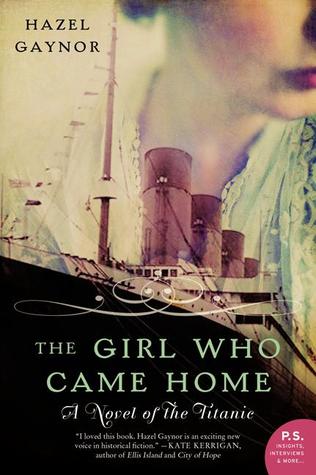 Goodreads Summary: Inspired by true events surrounding a group of Irish emigrants who sailed on the maiden voyage of R.M.S Titanic, The Girl Who Came Home is a story of enduring love and forgiveness, spanning seventy years. It is also the story of the world’s most famous ship, whose tragic legacy continues to captivate our hearts and imaginations one hundred years after she sank to the bottom of the Atlantic ocean with such a devastating loss of life.
In a rural Irish village in April 1912, seventeen-year-old Maggie Murphy is anxious about the trip to America. While the thirteen others she will travel with from her Parish anticipate a life of prosperity and opportunity - including her strict Aunt Kathleen who will be her chaperon for the journey - Maggie is distraught to be leaving Séamus, the man she loves with all her heart. As the carts rumble out of the village, she clutches a packet of love letters in her coat pocket and hopes that Séamus will be able to join her in America soon.

In Southampton, England, Harry Walsh boards Titanic as a Third Class Steward, excited to be working on this magnificent ship. After the final embarkation stop in Ireland, Titanic steams across the Atlantic Ocean. Harry befriends Maggie and her friends from the Irish group; their spirits are high, and life on board is much grander than any of them could have ever imagined. Being friendly with Harold Bride, one of the Marconi radio operators, Harry offers to help Maggie send a telegram home to Séamus. But on the evening of April 14th, when Titanic hits an iceberg, Maggie’s message is only partly transmitted, leaving Séamus confused by what he reads.

As the full scale of the disaster unfolds, luck and love will decide the fate of the Irish emigrants and those whose lives they have touched on board the ship. In unimaginable circumstances, Maggie survives, arriving three days later in New York on the rescue ship Carpathia. She has only the nightdress she is wearing, a small case and a borrowed coat, to her name. She doesn’t speak of Titanic again for seventy years.

In Chicago, 1982, twenty-one-year-old Grace Butler is stunned to learn that her Great Nana Maggie sailed on Titanic and sets out to write Maggie's story as a way to resurrect her journalism career. When it is published, Grace receives a surprising phone call, starting a chain of events which will reveal the whereabouts of Maggie’s missing love letters and the fate of those she sailed with seventy years ago. But it isn't until a final journey back to Ireland that the full extent of Titanic’s secrets are revealed, and Maggie is able to finally make peace with her past.

It seems fitting that I picked this book to read and then heard it was the 20th anniversary of the movie Titanic. This makes me feel insanely old. I'm not okay with it.

The Girl Who Came Home by Hazel Gaynor follows several characters and their journeys aboard the Titanic. It also follows Grace, a Titanic survivor's relative and journalist seventy years after the sinking of the Titanic. I really liked that you got a lot of different perspectives and the characters were all connected through their experience. I thought it was interesting getting the perspective from people in the third class lodgings.

For me, this book would have been much more interesting without Grace's side of things. I would have enjoyed it a lot more if it had just been the story of those on the Titanic and their journies to, during, and after the ordeal. Instead, there's this distraction of Grace finding herself and rekindling her relationship with an old boyfriend. I really felt like that detracted from Maggie's story, and sort of became the main story. The book would have stood alone with just the stories of the group on the Titanic.

I really would have liked to hear more about Maggie's life after the Titanic. There was a glimpse of it, but that was the story I really wanted to read. What was her life like once she got to Chicago? How did she go on about day to day life?  There's a big bombshell at the end about who Maggie's husband was, and I was shocked at it. I thought the story was going to end an entirely different way. That being said, I would have enjoyed it a lot more if the story showed more of her after the Titanic life, and that was put in as her story develops.  I'm not sure if what I'm saying completely makes sense; hopefully, it does.

I think the same goes for the other characters that were impacted by the Titanic. We got a bit of what happened to Peggy, Harry, and Vivienne. Admittedly, the way that Maggie was able to reconnect with Harry and Peggy was interesting. That being said, I think it could have still worked into a story about Maggie's life after the Titanic somehow. I really don't feel like Grace was necessary at all.

Overall, I enjoyed the story. I just wanted something different from it. There were a lot of things that I felt were too reminiscent of the Titanic Movie. Particularly the very end of the book. This in itself was a little disappointing.