Book Review of The Moonlight Palace by Liz Rosenberg 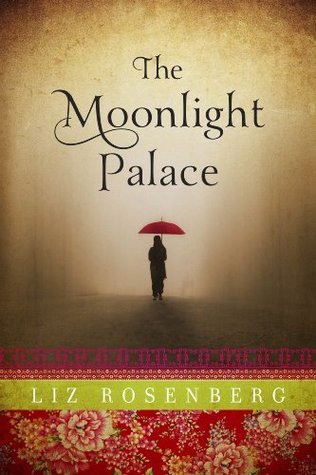 Goodreads Summary: Agnes Hussein, a descendant of the last sultan of Singapore and the last surviving member of her immediate family, has grown up among her eccentric relatives in the crumbling Kampong Glam palace, a once-opulent relic given to her family in exchange for handing over Singapore to the British.

Now Agnes is seventeen and her family has fallen into genteel poverty, surviving on her grandfather’s pension and the meager income they receive from a varied cast of boarders. As outside forces conspire to steal the palace out from under them, Agnes struggles to save her family and finds bravery, love, and loyalty in the most unexpected places. The Moonlight Palace is a coming-of-age tale rich with historical detail and unforgettable characters set against the backdrop of dazzling 1920s Singapore.

The Moonlight Palace is a short and sweet little gem from Liz Rosenberg. The story takes place in Singapore during the 1920's. The story follows Agnes on her quest to save her family and her home from poverty.

One of the things that I enjoyed most about this story is that it's a novella done right. It's roughly only 175 pages, but it feels like more than that. There's an excellent dedication to the history of the palace and Agnes' family that resides there. I found that the history given truly made me care about the palace.

I thought that this book was rather charming and the characters are lovely. Agnes is a very determined girl who seems to be wise beyond her years. British Grandfather was delightful. I enjoyed how important he was to the story, even though he stayed in the background most of the time. Nei-Nei down was probably my favorite character. She's so sassy, and I loved it.

I've been trying to broaden my horizons with books lately, and I'm glad I was able to do so with this one. It's a culture I had not previously read about, and an era I haven't read much about either. If I had to pick one word to describe this book, it would be charming.

four out of five moons