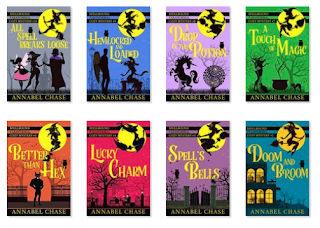 
Doing things a little differently for this post. Some of you may remember that my last few posts have been an odd review of a few of the books in the Spellbound series by Annabel Chase.  The situation with this is that there are 10 books in the series, they're all around 300 pages or less, and they're all available on Kindle Unlimited. Basically, I burned through this series so quickly that I can't separate the books in my mind. I've tried, but the entire series is just one book to me. Because of this, it's impossible to do a full review of each book.

If you'd like to check out the other reviews I did manage to do, you can find them below.

The links will cover books 1-4. I can't remember ever going through a series like this. I would seriously finish one book around midnight then pick up the next book in the series. The next thing I know it's four in the morning, and I just finished another book. Needless to say, I enjoy the series immensely.

If you haven't looked into the series, the general plot is that the town of Spellbound is a paranormal town with a wide variety of residents. The species range from witches, vampires, weres, and faires as some of the more common groups to gnomes, yetis, gorgons, and many more. It's a very eclectic town, but unfortunately, all of the residents are trapped there because of a curse put on the city how many ever centuries ago. Emma, shouldn't have even been allowed into the town because of the curse.

While in Spellbound, Emma becomes a bit of a celebrity and makes friends and enemies all across town. She ends up taking over the public defender role as the Vampire who previously held the office has been murdered. In true cozy mystery fashion, despite that it's not Emma's job to solve the crime anyways- she does anyway. That's pretty much the norm for each book. There's a crime, usually a murder, and sometimes it's related to whatever case she's taking on to defend.

Also, there's a reoccurring theme of Emma knowing very little of her past. All of her family passed away, and she worked too much as an attorney back in the normal world to have friends. So each book there's a little bit more about her past and Coven, as she is a distinctly different breed of a witch than those in Spellbound. This is where I really wish there was a bit more meat on the bones in the series. Don't get me wrong, there's a lot of information regarding her past, but it's given out slowly, and I just want more of it. The main plotlines, however, focus on whatever mystery is going on in town, her love and social life, and then her powers as they develop.

The off the wall details are what really drew me into this story, I think. Annabel Chase did a fantastic job of building her town up and making it seem like it could really exist. There were little things like magical shops where if you get a coffee you can get a magical shot of courage or honesty. There's a wishing store where you can conjure some items from the human world, like books. A fairy salon where you can get decked out in glitter. And of course, a pet store where you pick out your familiars. I really appreciate the details that went into making the town as much of the story as the murders and social aspects.

There is a copious amount of nerd references in the series. A good chunk of them are Harry Potter references. There's also a nod to the Craft as well as other movies. Annabel Chase does an excellent job of showing the seclusion of the town with these references. Emma is often found talking about something from the human world, and no one really knows what she's talking about.  I enjoy Emma as the main character because of how relatable she is most of the time.

Throughout the series, we get introduced to her very eclectic set of friends. Her four best friends are fellow remedial witches. For the most part, I like them, but I have a hard time keeping them straight. They all kind of blend together after a while. I also don't really understand the age of her friends. They're all younger than her by a few years, but one is 15 when the rest are in their early twenties. Them still being in remedial classes together seems like it's at the decision of the coven leader, but I don't really understand if the older girls have been remedial for several years. It's a bit confusing.

Relationship wise, Emma seems to have her pick of all the hot paranormals in town. Isn't that always the case in these types of books, though? The new girl is quirky and undercover pretty, so all of the guys must love her.  A Fallen Angel with a bad rep, Vampire with a bad rep, Good guy Minotaur, and a sleazy were-weasel that was more a cover for investigating a murder are some of the potential romance encounters. I will say that except for the latter, she had a hand in helping the guys she didn't end up with finding a relationship. At first, I was crazy with where her romantic life was going and thought the guy was a terrible choice, but he ends up redeeming himself in the final book.

Eventually the murders and the cases she's taking on as public defender feel like they take a back seat in the story. The focus is more on breaking the spell, where she came from, and the truth about who she is. Some of the details felt a little rushed, but I felt like the last book did wrap everything up in a neat little package. It ends with a way to expand the series, and there is a spinoff series called Spellbound ever after. I haven't dived into this series yet, but I plan to eventually.

Overall, I really recommend this story. It's a nice cozy mystery series with a lot of great details. Each book is a quick read, and it's obviously binge-worthy. I'm at a loss as to where to rate the books and series. I enjoyed it, but I don't know that I would say I'm obsessed with it enough to give it a five. It's definitely not going to be everyone's cup of tea, but it's a good read for cozy mystery lovers, paranormal lovers, and paranormal romance. It's a reasonably clean series with it being a cozy mystery. I think that across the board I'd give the series a pretty solid 4.

I'm going to do a full challenge update either at the end of December or early January. I love seeing the comments on the 2018 reading challenge that people are finished with it and eagerly waiting next years! I've not done too great with this year's challenge. This series certainly didn't help. I never was really able to find places to fit any of the books. So the 2018 challenge is definitely lacking, however, I've already met my Goodreads yearly goal of 30 books. I'm actually at 31! I'm guessing I'll finish with 32.

I'm in the midst of finishing up reading Aaru 2: Halls of Hel, the sequel in Dr. David Meredith's series. This will be the third review that I've done at Dr. Meredith's request. If you want to catch up, you can check out my review on Aaru here. I'm about halfway through with Halls of Hel, so I hope to have it finished up here within a week or so.

Get excited! The 2019 reading Challenge will be posted by the end of the week. Partner in crime, Tress and I just finalized it. We're pretty happy with it, so far. We've kept the same format for our challenge, but changed some of the topics and added some new features. I think you all will really like it. If you want to catch up with Tress, she just posted her latest update for the challenge on her blog, and you can find it here.
Posted by Linz The Bookworm at 12:28 AM