Book Review of The Palace Job by Patrick Weekes 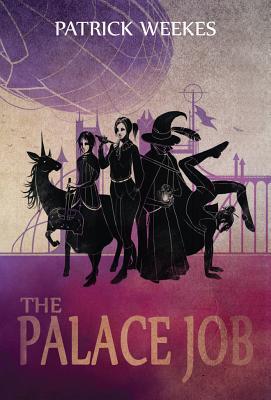 It would help if she wasn’t in jail.

The plan: to steal a priceless elven manuscript that once belonged to her family, but now is in the hands of the most powerful man in the Republic. To do so Loch—former soldier, former prisoner, current fugitive—must assemble a crack team of magical misfits that includes a cynical illusionist, a shapeshifting unicorn, a repentant death priestess, a talking magical Warhammer, and a lad with seemingly no skills to help her break into the floating fortress of Heaven’s Spire and the vault that holds her family’s treasure—all while eluding the unrelenting pursuit of Justicar Pyvic, whose only mission is to see the law upheld.

What could possibly go wrong?

I'm not entirely sure where 2018 went. Since it's nearing the end of the year, I wanted to try and squeeze out another book to put towards the 2018 reading challenge. Since I still needed a Comedy, I figured this would be one of the more easier challenges to get done quickly. Being able to shop by genres on kindle unlimited is a beautiful thing.

I wasn't really sure how I was going to feel about this book. The description seemed interesting, and it had decent reviews, so I figured I'd give it a shot. At one point in time, while I was still early into it, I described it on Facebook as "the weird love-child of Ocean's 11 and World of Warcraft." After finishing the book, I still feel that's a pretty apt way to describe it.

Initially, I was kind of confused and kept checking to see if I was actually reading the first book in the series or if it was a spinoff series. The first chapter is really captivating, but there's a lot of info that just went over my head while reading it. I felt like I was missing simple explanations of the world and why things were how they were. Eventually, it gets more into the action, and I stopped caring about the background of it. This was the case for most of the book. I still had questions, but I was entertained, so I didn't necessarily care about getting the answers. Towards the end, I feel like a lot of initial problems I had were answered. I read more Urban Fantasy than "high-fantasy" so I could have probably done with a crash course.

I was really impressed with the humor in the book. I'll share some quotes I liked at the end of the review. I've been awful at doing that lately. Sorry about that. I do post all of my highlights on Goodreads, so feel free to follow me on there! I'm always cautious about things labeled as humorous because I tend to think it's going to be more slapstick than genuine wit. I hate slapstick or things that are funny because of how stupid they are. With The Palace Job, I actually found myself having to silence my laughter since it was late at night when I was reading. It was really well done, even the "your mom" jokes from Kail. I think what really surprised me is that within the humor Weekes hit a lot of really controversial issues like the division of political parties, racism, corruption, etc. I was immensely amused by the fact that citizens got their news from a puppet show.

I really liked the set of characters in this The Palace Job. Loch is a pretty badass main character. I felt like she was fairly clever. I liked the bond that she and Kail had and as a reader you really got a feel for how close they were. I liked all of the characters in the band of misfits, however, Desidora was my favorite. I think that a full story on her would be something I would love to read. Her character actually has given me an idea for a discussion topic for a later post, so I'm not going to dive too much into why I was so drawn to her here. I will say that the idea of a Love Priestess turned Death Priestess just immediately grabbed my attention.

Plot-wise, I was highly entertained by all of the twists and turns. The Palace Job is heavy in action, which is nice. I don't think there was ever a moment when I felt like the story was dragging or that I was bored. I found myself wanting to get done with whatever responsible thing I had to do so I could pick it up and read some more. The Palace Job by Patrick Weekes is about 400-500 pages. So it's not incredibly long, but not so short where you're feeling like part of the story is missing. I did read that it's apparently based off of another author's series, so I'm wondering if that may be why I felt confused in the beginning. Overall, entertaining read and would definitely recommend to fantasy lovers!

“I’m just saying, as someone who occasionally rigs fights, I’m offended by the lack of professionalism.” - around 13%

"This was not a technical falsehood, which was good, as Hessler preferred to remain truthful when daring the gods to slay him if he were lying." around 19%

“Are we, in fact, Imperial agents?” Icy asked curiously. “If so, I will adopt the necessary patriotism.”- around 61%