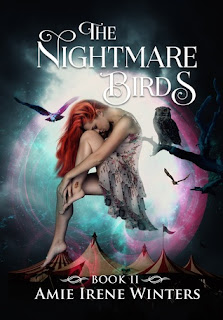 Goodreads Summary:  Only those who possess wild eyes, an impulsive heart, and a wandering spirit hunt for the Theater of Secrets—and once they witness the darkest of magic, they don’t return.
It promises to change your life forever—but is the mysterious Theater of Secrets legend or something more? Tasked to answer that very question, Daisy Darling sets out to uncover the truth and is thrown headlong into a life where inexplicably strange and dark things happen nightly. A life of deception and uncertainty. A life in the spotlight as the theater’s ringleader.

As Daisy assumes her new role, she not only discovers a surprising connection between herself and the previous ringleader, but also the haunting truth behind the theater’s limitless power. Determined to expose the theater and foil its wicked plan, Daisy must first embrace her heritage before she can defeat the dark forces at play.
Goodreads Rating: 5 stars with 5 ratings
Genre Listing: Fantasy, Adventure, Young Adult
Get the Book: Amazon

Disclaimer: I received an e-copy of this book from the author in exchange for an honest review.

So, a few months ago, I was contacted by Amie and she asked me to read her book Strange Luck. I finished it, enjoyed it, and reviewed it. Also, she asked me to do a cover reveal for her second book The Nightmare Birds and asked me if I would review that as well. I was hoping to get it read closer to the release date, but things have been crazy lately. Hey! Better late than never. I'm only 20 days late.

The most important thing I can stress about Nightmare Birds is how incredibly creative it is. I wasn't sure what was going to happen in this story. I didn't read the summary beforehand, and I'm pretty glad I didn't. It kept me surprised that way because I had no clue what I was getting into.  This premise is super creative and exciting.

The Nightmare Birds cuts to the chase and gets right into the story. There's not a ton of background story from Strange Luck. What you need is there, but it's not so much that it bogs the story down to where it can't move on. It moves very fast and for the first part of the book I was left with a lot of questions. I was having a hard time getting into it until about 60% in. I was interested before that, but I wasn't REALLY into it until that point.

I'm kind of glad that Roger wasn't in much of the story. During the beginning, he was kind of annoying me, and the relationship between he and Daisy felt rather forced. I just don't feel like there is a ton of chemistry between them. The whole situation surrounding Roger just seemed out of place and more like filler. If Roger was completely cut from the story, I don't know if anything would have changed that much.

I'm not totally sure what happened in the ending "battle." I felt like it was glazed over and played down quite a bit. There could have been more there. I will say the very end scene is what peaked my interest. I was completely surprised, and it has me geared up if there is ever a third book!

Overall, I enjoyed the book. I think I enjoyed Stranger Luck a bit more but was pleased to see there was still a psychological aspect in The Nightmare Birds. I'll read the next book, regardless of if Amie asks me to or not (Thanks for the books, Amie!) It's an excellent light series with some dark aspects. I appreciate how quickly it moves, especially since I don't have much time to read right now.

Posted by Linz The Bookworm at 5:37 PM