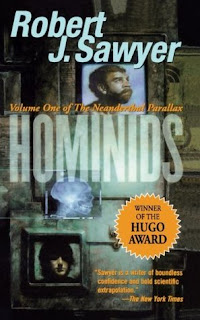 Goodreads Summary: Hominids is a strong, stand-alone SF novel, but it's also the first book of The Neanderthal Parallax, a trilogy examining two unique species of people. They are alien to each other yet bound together by the never-ending quest for knowledge and, beneath their differences, common humanity. We are one of those species; the other is the Neanderthals of a parallel world where they, not Homo sapiens, became the dominant intelligence. In that world, the Neanderthal civilization has reached heights of culture and science comparable to ours but is very different in history, society, and philosophy.
During a risky experiment deep in a mine in Canada, Ponter Boddit, a Neanderthal physicist, accidentally pierces the barrier between worlds and is transferred to our universe, where in the same mine, another experiment is taking place. Hurt but alive, he is almost immediately recognized as a Neanderthal, but only much later as a scientist. He is captured and studied, alone and bewildered, a stranger in a strange land. But Ponter is also befriended by a doctor and a physicist who share his questing intelligence and boundless enthusiasm for the world's strangeness, and especially by geneticist Mary Vaughan, a lonely woman with whom he develops a special rapport.

Meanwhile, Ponter's partner, Adikor Huld, finds himself with a messy lab, a missing body, suspicious people all around, and an explosive murder trial that he can't possibly win because he has no idea what actually happened. Talk about a scientific challenge!
Goodreads Ratings: 3.79 stars with over 17,000 ratings

Hello, Readers, and Happy August! I am thrilled that Fall is approaching soon. It's absolutely gorgeous in Minnesota when the leaves turn. I wish it'd stick around longer since it's my favorite season.
There's not much real-world stuff to catch up on since I did a Birthday post last week, so I'll jump right into Hominids by Robert J. Sawyer.
This is not a book I would have picked for myself in a million years. This story got on my radar because, in the Spring, my husband's aunt and uncle visited briefly. I had recommended Humans by Matt Haig and, in return, was sent Hominids by Robert J. Sawyer. I won't lie; I was slightly nervous to read it. I was afraid that the science discussed in the book would be way over my head. I was pleasantly surprised, however.
Hominids was really easy to get into. The characters were interesting, as was the story. The science discussed was really approachable. There was an explanation for anything that was pretty complex, which was appreciated. There was even some further explanation regarding how Neanderthals in the book calculated things.
I liked how the story went back and forth between the two worlds. It gave an interesting comparison and explained the sociological differences between the two worlds. Sawyer really took care in thinking about how to have Ponter learn the language and how the Neanderthal society would work, including how their legal trials functioned. Both parts of the story were intriguing, but I think I liked the Neanderthal side more just for the logical approach everything had.
Trigger warning - there is a rape scene in the book. I don't really feel like it was a necessary scene to move the story forward; however, I do appreciate that it shows the victim coping with it, including seeking a support group. It also briefly discusses how the situation is handled in today's world compared to the Neanderthal's world. So I guess in that aspect, it did serve a purpose.
Overall, I really enjoyed Hominids by Robert J. Sawyer. The parallel universe with the inclusion of Neanderthals was really interesting, and the characters were likable. This may be a good fit if you are looking for an easy-to-read Science Fiction or Alternate History.

Posted by Linz The Bookworm at 9:44 PM