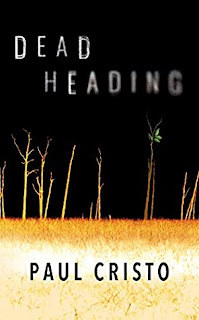 Goodreads Summary: A bizarre sickness is infecting the planet, turning its victims into contorted piles of flesh. Lewis barely notices though, rarely looking up from his number-crunching job and voracious appetite for streaming entertainment. But his life changes forever after waking up one morning to find the world's population eradicated. Stranded without food or water, he's forced to use ingenuity to survive, foraging resources from the desolate city around him.
Until he discovers he's not alone.

Lewis's new life is threatened by a violent gang of gun-wielding scavengers. He learns these men are harvesting survivors, inflicting slavery, and torture for a horrifying purpose.

Outmanned and outgunned, Lewis and some newfound friends must band together, employing their collective wit and cunning against a deadly foe to avoid being killed. Or worse... captured.

Time to get the legal stuff out of the way: I received a free copy of this book in exchange for an honest review.

Deadheading takes place as a strange sickness wipes out most of the earth's population. Our unlikely hero, Lewis, survives it by hunkering down in his apartment and living off of frozen TV dinners until he runs out and is forced to go out into the new world. Teaching himself new skills, he survives on what he can find in the city.

I think the thing I like most about Deadheading is that Lewis isn't presented with some ingrained idea on how to survive. I don't think most people actually know what they would do in the event of an apocalypse. Lewis sets out and scavengers what he can to survive, but ultimately ends up relying on the library and books he finds for information. From the scavenged knowledge, he learns to garden, learns a bit about chemistry, and learns how to become a pilot. I think that based on how this story was written that Paul either has the knowledge in real life or did a lot of research. It felt realistic and not like he was just making things up for the sake of the story. If he was, well, then good job for making it seem believable.

In case you're wondering, this is not a zombie story. This is just pure survival after the world ends. The biggest enemies are the lack of resources and the remaining people who exploit the weaker survivors. The villain in this kind of reminded me of Penguin from Batman Returns. Other than how the appearance is described, I don't know that there's an actual correlation. If you read my reviews on The Wheel of Time series, you'll know my brain goes to weird places when I read (find it here).

Anyways, back to Lewis. I like him as a character a lot. He's smart and a bit snarky. Even his inner thoughts had a sort of sarcastic tone to them, which I found humorous and enjoyable. Mostly, he just seems like a regular guy in a terrible situation, trying to make the best out of it. Eventually, he realizes he's not the only one left in the world, and we get introduced to Frankie. I liked her, as well. She's tough as nails and feels like a good compliment to Lewis. They work well as a team.

I felt like there was quite a bit of satire in Deadheading. I don't know if it was intentional or not, but I enjoyed it quite a bit. The book was released at the end of March and plays into what's currently going on in the world now. I don't want to go much further into details on this, because I feel like it could trigger debates on my blog, that I'd just rather stay away for. But I'll leave it at that I love the satire, intentional or not.

Overall, I really enjoyed this book a lot. It's not terribly long, only 350 pages. It has a good pace and moves quickly. I was honestly hooked in the first couple of pages. It's got just enough gore and is peppered with humor and satire. I'd definitely read more from Paul Cristo. My highlights didn't sync on Goodreads, so, for this, I'll bring back some of my favorite quotes in the blog post. Also, my commentary on the quotes is in parentheses.

Quotes from the book:

"Talking heads delivered constant assurances that the sickness hadn't breached our borders. But the idea that we could stay free and clear of the epidemic became more absurd by the hour." (Hmm...No comment from this peanut gallery.)

"Regardless, I liked peanut butter cups, so even the slight possibility of a temporary shortage would be disproportionately traumatic for me." (Same, Lewis. Same. Peanut butter cups are my fav. Especially when chilled.)

"Mildred, you saucy minx." (This just made me giggle.)

"Then she said I was a revolting sloth who had a shitty haircut and flamingo legs." (I want to start calling people this.)

"Like most of my plans, I instantly regretted the execution." (Same.)

"When we failed, we learned. When we succeeded, we celebrated." (Words to live by!)

Posted by Linz The Bookworm at 3:28 PM