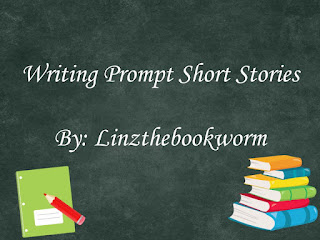 Ooh? What’s this? A new feature!?! Yep! It’s probably going to be a regular one, too. For those of you who don’t know, I’m actually an aspiring author. I’ve got a handful of stories in various stages, but when I try to work on them, I just get horrendous writer’s block. My good friend and fellow blogger got me into listening to a podcast called Writing Excuses. It’s fantastic, and I highly recommend it. While binge-listening to it earlier in the week to inspire Tress and I both to write more. The idea is that about once a month, we find each other writing prompts to expand on. It’d hopefully get us both writing more and give us more blog posts to keep up on. I’m not sure if Tress is going to post hers to her blog or not, but you can e-stalk her here.

So, she gave me my first prompt, and it’s actually from Writing Excuses Season 2, Episode 31. You can check out the podcast here. I make no guarantees this will be good. I didn’t do much in the way of editing because it’s 12:30am right now, and, honestly, I just don’t care.

Prompt: An Author comes up with a wacky, crazy gimmick for a book... and then it happens to the author in real life.

Short Story: Mabel and the Elephants

Mabel Jones sat at her desk, trying desperately to put pen to paper. Her publisher was figuratively breathing down her neck, but Mabel feared if she missed her deadline, it’d become literal.

When she had decided to do writing full time, Mabel thought it’d be this fantastic thing where all the creative energies steadily flowed out of her fingertips, manifesting into ideas, stories, and novels. What it actually turned into, however, was all of her creativity hitting a wall, repeatedly. So when her four-year-old daughter, Vanessa, asked to go to the zoo, Mabel happily obliged.

It was a crisp fall afternoon when Mabel and Vanessa arrived at the zoo. It wasn’t crowded, which was nice. Mabel hoped that it’d allow Vaness, or Nessy as she was fondly called, to get a chance to be up close to see the elephants. The zoo had just introduced a juvenile elephant named Rupert to the herd.

They started their adventure by getting lunch. Nessy insisted that they get animal-shaped juices. Vanessa picked out a green monkey, which she named Jade. Mabel opted for a red crocodile that she gave the ironic name of ‘Hook.’

After lunch, Mabel and Vaness walked around the zoo. They watched each of the animals for a bit before moving on to the next exhibit. Eventually, they made it to the elephants where Vanessa squealed with delight at the sight of Rupert.

“Mommy?” Vanessa asked as she watched Rupert play with the other elephants.
“Yes, Loch Ness Monster?” Mabel teased her daughter while placing a gentle hand on Vanessa’s head. She was so grateful for this moment.
“I’m not the Loch Ness Monster.” Vanessa giggled. “Mommy, wouldn’t it be funny if animals were people, and people were in zoos?”
“Yeah, Nessy. That would be pretty funny.”

The next morning, Mabel woke as usual and started going about her morning routine. She started her morning by starting a pot of coffee. Magic bean juice makes the brain go fast. She thought idly to herself as she checked her watch. She needed to get Vanessa up soon and ready to go to daycare. Mabel dropped her off a couple of days a week so Nessa could socialize, and she could have some time to work. Mabel was fortunate that her husband Stuart had come home from work after the zoo adventure. He entertained Vanessa most of the evening so she could get some work done. All she could think of, however, was zoo animals becoming people and vice versa. It wasn’t really what her publisher was requesting, but she went with it anyway.

In her prose, she wrote about a woman named Maxine who’s neighbors slowly became zoo animals. They didn’t seem to notice the change or that they were suddenly different than Maxine. They just went about their day like it was Richard Scarry’s Busytown.

Mabel didn’t even realize she had been lost in her own thoughts until she heard Vanessa. They were on the front porch about to walk out to the car, parked on the street when Vanessa started calling for her rather urgently.

“Mommy! Mommy!” Vanessa exclaimed. “Mommy! Mrs. Bucannan is a giraffe!”
“Vanessa Suzanne Jones! That is rude. You do not call people names.” Mabel lectured in a low voice, hoping that Mrs. Bucannan did not hear the child call her a giraffe. (Though she was a bit of a giraffe at six feet tall.)

Mabel looked up, trying to hide her face of sheer shock. Mrs. Bucannan was usually out tending to her yard. Today there was definitely something next door. Mabel eyed up the Giraffe’s long neck. She finally reached the head where the Giraffe starred at Mabel, expectantly. Mabel couldn’t help but notice that it was wearing Mrs. Bucannan’s sundress and purple straw hat.

“Rough morning, dearie?” The Giraffe... Mrs. Bucannan asked.
“Mhm... Yes... I was ugh... up late working and am still trying to wake up, I guess.” Mabel finally sputtered out. Make the words and form the sentences, Mabel Lynn, Mabel thought to herself.
“Ah, well... I can’t wait to read your next story, dear. I particularly enjoy reading them with my afternoon tea. You girls have a nice day.”
“Yes, ma’am. You too.” Mabel replied. She briefly wondered how Mrs. Bucannan was doing yard work with hooves but pushed the thought aside.

And that’s how her day went. Mabel dropped Vanessa off at daycare to find that the teachers were now sweet little otters. She went to the grocery store and discovered that the cashiers were a flamingo, aardvark (sitting on a stool to reach the register), and rhinoceros. The bagger was a large Orangutan that Mabel desperately hoped didn’t smell that way as a human. Yuck.

Mabel stayed in town a little longer than she had planned, but she was just so fascinated by what was happening. In the back of her mind, she knew she should be freaking out. Mabel had written about animals becoming humanistic, and it was happening. She knew she should be running back home or trying to wake up from what was definitely a dream, but how could she when there was something new to see, everywhere. Alligators were walking dogs on leashes, Koalas were working on power lines, and water buffalo were driving cars. It was so surreal, and Mabel couldn’t look away.

By the end of the day, Mabel was exhausted, and Vanessa kept going on about how cool the animals were. Mabel was too tired to wonder how she and Vanessa were the only humans she saw that day. She pondered if Stuart had changed as well. He had flown out on business earlier in the day, and they had only spoken briefly on the phone.

Mabel woke the next morning, much like she did every day, except for today she was utterly confused. She had fallen asleep on the couch after putting her daughter to bed, but that is not where she resided now. There was sunlight shining in her eyes, and Mabel found herself on a cold, somewhat dirty, floor. She looked around and saw there were other people in cages while animals walked around. The caged humans seemed to be utterly unphased like this was just their everyday routine. Mabel’s thoughts were interrupted by two elephants talking in front of her. One appeared to be a very young elephant.

“Mommy, what animal is this one?” the little elephant asked excitedly.

“Well, dear,” The older elephant briefly looked down at a plaque, “it says here that this is called a Mabel. She shares this space with her mate Stuart and their calf, Vanessa.”
“Oh, neat.” The young elephant replied.
“Come along, Rupert. It’s time for lunch.”
And so, the young elephant trotted off for lunch.